Marmion is a northern coastal suburb of Perth, the capital city of Western Australia. Its local government area is the City of Joondalup.

Prior to white settlement, the Whadjuk Aboriginal people, who called the area Mooro, gathered abalone and other shellfish in large numbers off the nearby reefs.

The area was popular with fishermen in the 1930s, and numerous boatsheds and shacks were built there, as well as a whaling station. A townsite was gazetted in the area in 1940, but it remained largely undeveloped until the late 1950s, when the Postal District of Marmion was approved. At first, the only development in the area was the primary school, opened in 1956 as a two-teacher school and nicknamed "The Little School in the Bush", accessible only by a track until the mid-1970s. By 1961, the area west of Cliff Street was largely developed, and the Marmion Angling and Aquatic Club had been established. The rest of the suburb was developed between 1973 and 1976.

Marmion is bounded by High Street and Freeman Way to the north, Marmion Avenue to the east, the Beach Road coastal segment to the south and West Coast Drive and the ocean to the west. 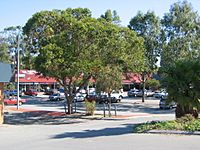 Marmion is a residential suburb, relying on the Marmion Village shopping centre in Sheppard Way for basic commercial services, and Karrinyup Shopping Centre and Centro Warwick for other services. The suburb is served by the Marmion Primary School and falls within Carine Senior High School's catchment area. Braden Park, a large park with play equipment and lighting, is situated near the shopping centre.

The Marmion Angling and Aquatic Club is a boating and fishing club located above Marmion Beach, which has a function room overlooking the Indian Ocean. Off the coast is the Marmion Marine Park, which provides a home for many species of marine animals.

Marmion's west is served by the Transperth 423 bus route between Warwick and Stirling, while the 441 bus along Marmion Avenue serves the eastern part of the suburb. All bus services are operated by Swan Transit.

Marmion has one state public school, Marmion Primary School, which caters for kindergarten through to year 6.

All content from Kiddle encyclopedia articles (including the article images and facts) can be freely used under Attribution-ShareAlike license, unless stated otherwise. Cite this article:
Marmion, Western Australia Facts for Kids. Kiddle Encyclopedia.