Butler is an outer suburb of Perth, Western Australia, located 41 kilometres north of Perth's central business district. It is part of the City of Wanneroo local government area. It forms the majority of the Brighton Estate, a large commercial and residential development by Satterley.

Butler is bordered to the west by Jindalee and Quinns Rocks (Marmion Avenue), to the south by Merriwa and Ridgewood (Lukin Drive) and to the north by Alkimos (Butler Boulevard). The Joondalup railway line reserve separates Butler from the rural locality of Nowergup in the east.

2 kilometres west of Butler is the Indian Ocean.

"Butler" was approved by the Shire of Wanneroo for the area in 1979 in honour of John Butler, the first recorded explorer of the Wanneroo and Lake Joondalup areas in 1834.

The marketing of the "Brighton Estate" in Butler by Satterley, with many amenities and establishments also adopting the "Brighton" nameplate (e.g., Brighton Village Newsagency), has led to Brighton's becoming synonymous with Butler and causing confusion amongst residents and sight-seers alike. Residents submitted a petition to the City of Wanneroo in 2003 for the suburb's name to be permanently changed to Brighton. The request was rejected on account of duplication with many other places across Australia named Brighton, as well as the name's lacking both historical and cultural significance within the area.

Although Butler was gazetted in 1979, it remained unpopulated bushland until the early 2000s, with no landmarks or conventional roads providing direct access to the area. The Butler-Ridgewood Agreed Local Structure Plan was approved by the City of Wanneroo in 2002, allowing early subdivision and development of the site to commence in 2003 by Satterley, the principal investor in the suburb.

Satterley's Brighton Estate plan takes up all of Butler and also extends into the neighbouring suburbs of Ridgewood, Jindalee and Alkimos. Butler contains four sub-divisional estates within the Brighton area; "The Dunes", "The Green", "Seahaven" and "Junctions North". Over $120 million was spent on landscaping, civil construction and community infrastructure to create the Seahaven and The Green estates, the Brighton Village Shopping Centre on Marmion Avenue and the Central Park Precinct.

At the ABS 2006 census, Butler had a population of 5,056. This represents a huge increase, as Butler's population was negligible during the 2001 census just five years earlier. The population is predicted to continue growing at a remarkable rate, peaking at 12,903 in 2016. Only 53.4% of Butler's population were born in Australia, with 25.4% born in the United Kingdom, a figure in line with other nearby suburbs such as Quinns Rocks and Mindarie.

The average age of Butler's residents is 28, a very young population compared to the Australian national average of 37. Income levels are also substantially above the national average, with a median household income of $1,205 per week, compared to $1,027 per week nationally. 49.8% declared a denomination of Christianity as their religion, with Anglicanism being the most popular at 24.3%. Butler contains one Pentecostal church, Westpoint Coastal Church. 26.6% of the population declared no religion. 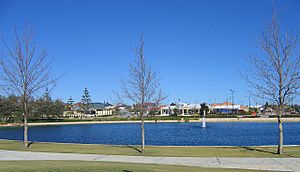 Butler was established by the Department of Planning as a "district centre" in their Directions 2031 urban expansion plan, highlighting it as a centre for commercial activity and public services, secondary to the nearby town centres of Clarkson and Alkimos.

Kingsbridge Boulevard, one of the core distributor roads through Butler, contains a strip of shops, banks and public services, as well as a large Coles supermarket, providing for the suburb's major shopping needs. Along this stretch is also a pub, The Cornerstone Tavern, opened in 2010, which provides nightlife and entertainment functions for the whole area from Butler to Jindalee. Most of Butler's amenities are located at the western edge of the area, adjacent to Marmion Avenue, while eastern Butler remains strictly residential in character.

Butler contains several parks in various places throughout the area, including a strip of parkland running all the way down Kingsbridge Boulevard. The Butler Community Centre is located in south Butler.

Marmion Avenue is the only arterial road connecting Butler to the rest of metropolitan Perth, as well as the far outer suburb of Yanchep in the north. Connolly Drive also terminates at Butler, and runs parallel to Marmion Avenue into Clarkson, Kinross and Currambine. The Mitchell Freeway extension to Butler is in the planning stages.

The Butler railway station on the Joondalup line was opened in 2014 in northern Butler and is currently the terminus of the line. This station provides a rail link to Joondalup and onwards to Perth and Mandurah. Butler station is also served by six bus routes, three of which run south through Butler to terminate at Clarkson station

All content from Kiddle encyclopedia articles (including the article images and facts) can be freely used under Attribution-ShareAlike license, unless stated otherwise. Cite this article:
Butler, Western Australia Facts for Kids. Kiddle Encyclopedia.