Kinross mostly contains young families and overseas migrants, especially from the United Kingdom, Ireland and South Africa. Several parks are dotted through the suburb, most of which offer playground facilities.

The schools are in the heart of the suburb located along Kinross Drive and Callander Avenue. Kinross Primary School was opened in 1995, and Kinross College, a "Middle School" serving years 6-10, was opened in 2002.

Kinross has its own football club (Westside Soccer Club) which plays its home matches at the MacNaughton Park ground. There is a skate park and community centre next to MacNaughton Park. 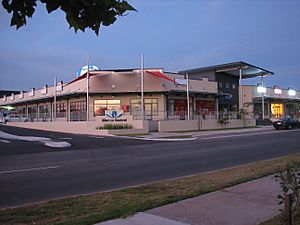 42.9% of the population were born overseas, which is significantly more than the Australian population percentage of 22.2%. A large number of people who were born overseas were from England (21.0%). The next most common responses of their country of birth were Scotland, South Africa, New Zealand and Ireland. The most popular language spoken at home other than English was Afrikaans (1.1%). The next most popular spoken languages were Arabic, Persian, Mandarin and Cantonese.

25.9% of the population in Kinross are Anglican and 22.3% are Catholic. These are the most popular religions in the suburb. 24.3% of the people have no religion.

Kinross is located northeast of Marmion Avenue and Burns Beach Road, and the Mitchell Freeway which extends to Burns Beach Road. The southeastern corner of Kinross is also served by the Currambine railway station, whilst other sections are served by one of three Transperth bus routes operated by Veolia Transdev which run between Joondalup Station and Clarkson Station. The 471 service travels along Marmion Avenue, turns into Edinburgh Avenue and onto Kinross Drive, it travels to the most northerly point of Kinross Drive where it terminates. The 473 service duplicates the route that the 474 takes through Kinross, except that the 473 terminates at Duart Pass. The 474 service proceeds along Connolly Drive, turning onto Selkirk Drive and MacNaughton Crescent, onto Geoff Russell Avenue across to Kinross Drive. The 474 (via Marmion Avenue) terminates at Clarkson Train Station.

All content from Kiddle encyclopedia articles (including the article images and facts) can be freely used under Attribution-ShareAlike license, unless stated otherwise. Cite this article:
Kinross, Western Australia Facts for Kids. Kiddle Encyclopedia.