Burns Beach is a suburb of Perth, Western Australia, located 34 kilometres (21 mi) north of Perth's central business district at the northern fringe of the City of Joondalup. Burns Beach has managed to maintain much of its original character as a small coastal village even with its loss of isolation, and the beach is popular among hang gliding enthusiasts.

The land at Burns Beach was originally owned by the Midland Railway Company. In 1908, following a request from 50 local residents, the Wanneroo Road Board (which eventually became Wanneroo City Council) successfully applied for a 20-hectare (49-acre) reserve for camping and a health resort. By the 1920s, the area was well used by locals who knew the area as "Burns Beach" after a farmer who ran sheep in the area.

For many years it was accessible only by track or boat and functioned as a small coastal village, and tourism and fishing were the main occupations. After the Second World War, it was connected by road to Wanneroo Road.

The sprawl of housing development extending northwards from Perth reached Burns Beach in the early-to-mid 1990s with the growth of Joondalup as a regional centre and the construction of the suburbs of Currambine and Kinross. 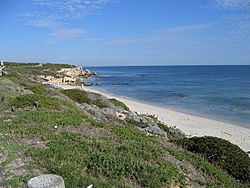 View of Indian Ocean - South towards Ocean Reef and Hillarys at Burns Beach. The coastal nature walk can be seen to the top left.

Burns Beach has managed to maintain much of its original character even with its loss of isolation, and the original caravan park is still in operation. Burns Beach marks one end of a coastal nature walk extending to Fremantle. The suburb also contains a cafe and restaurant (Burns Beach Cafe and Restaurant) with outdoor seating, as well as a picnic area (beware sandflies) with barbecues and toilets. The historically rich Jack Kickeros community hall is the site of many memorable moments. Burn's Beach's ocean facing parking bays are a popular destination for residents seeking a pleasant spot to watch the sun set in the summer or watch the waves pound through in winter. The parking lot's most seasoned visitor, Michael Stephens, claims to enjoy the "soothing effect of the ocean's waves and the awe inspiring sunsets that come by every so often". A new estate, Peet Limited's Burns Beach Estate, is presently being built north of Burns Beach Road. In early 2006 clearing and road widening were undertaken to facilitate the construction. A community centre and school is expected to be built as part of the development.

Burns Beach is bounded by the ocean to the west, Marmion Avenue to the east and Burns Beach Road to the south. Tamala Park, a bushland buffer to the north, separates Burns Beach and Kinross from the Mindarie-Clarkson urban region.

At the ABS 2001 census, Burns Beach had a population of 225 people living in 90 dwellings, with a median age of 39 years (among the oldest in the northern suburbs). A caravan park at the end of Ocean Parade (technically in Iluka) houses another 90 residents. Residential styles in Burns Beach include a mix of holiday dwellings from before and after World War II.

Burns Beach is served by the 470 and 471 Transperth bus routes from Joondalup, operated by Transdev Perth.

All content from Kiddle encyclopedia articles (including the article images and facts) can be freely used under Attribution-ShareAlike license, unless stated otherwise. Cite this article:
Burns Beach, Western Australia Facts for Kids. Kiddle Encyclopedia.