Merriwa is an outer suburb of Perth, Western Australia, 36 kilometres (22 mi) north of Perth's central business district. It is part of the City of Wanneroo local government area. It is a predominantly residential suburb, containing two RAAF retirement villages.

The name "Hester" was originally approved for the suburb by the Shire of Wanneroo in 1980, after Thomas Hester, one of the first land owners in the vicinity. The neighbouring suburbs of Clarkson and Butler were also named this way. However, the name was opposed by Australia Post due to conflict with the already-existing town of Hester in south-west WA. "Merriwa", an Aboriginal word meaning "a good place", was then proposed and approved for the area within the same year. The original name survives in Hester Avenue, an east-west arterial road that forms the southern boundary of the suburb.

A town also named Merriwa exists in New South Wales. The Geographical Names Board of New South Wales lists an alternate meaning for its name, as "plenty of grass seed and flour made from it." 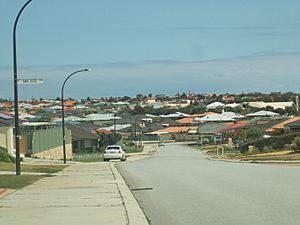 Up until the late 1980s, Merriwa was unpopulated bushland with no notable land features other than Quinns Road, a two-lane arterial road linking the adjacent townsite of Quinns Rocks to Wanneroo Road. The original Quinns Beach Estate in the south of Merriwa was developed in the late 1980s and early 1990s by Smith Corporation, who were also responsible for the development of the marina in nearby Mindarie at the time. Many early residents of Merriwa suffered from lack of facilities, poorly built pavements and roads, lack of street-lighting and isolation from other areas (as Marmion Avenue had not yet been extended.) This led to the formation of the Merriwa Development Committee, with the purpose of lobbying the Council to support the issues raised.

Carnegie Private Estate was then built in the mid 90's in the area east of Connolly Drive by Town and Country Bank. In 1998, Merriwa was bifurcated along Connolly Drive by the City of Wanneroo, and the eastern half, including the Carnegie Estate, was gazetted as the new suburb of Ridgewood.

Seagrove Estate in the north was built much later in the early 2000s by Caversham Property, and is delineated from the Quinns Beach Estate by the Grand Paradiso Parade and Seagrove Boulevard roads. This development was also supported by a "Merriwa Structure Plan" devised by the City of Wanneroo, to provide adequate services and public open space for residents of the area.

Two RAAF retirement villages, Merriwa Estate and Cambrai Village, are also located in the northern and southern extremes of the suburb.

Merriwa is bounded by Butler to the north (Lukin Drive), Ridgewood to the east (Connolly Drive), Quinns Rocks and Mindarie to the west (Marmion Avenue) and Clarkson to the south (Hester Avenue). The suburb was originally much larger, extending to the Joondalup railway line reserve in the east, but was split in two in 1998.

It is 2 kilometres (1.2 mi) from Quinns Beach and the Indian Ocean to the west.

Merriwa had a population of 5,220 at the ABS 2006 census, an increase of 1,167 people since the 2001 census. However, the suburb's population is predicted to remain stable in the future. Although Merriwa's 64.2% Australian-born population is below the national average of 70.9%, it is still significantly higher than all adjoining suburbs, which have important British-born populations. Correspondingly, Merriwa's British-born population are a minority at 14.2%. The median age of Merriwa's residents is 33, compared to the national Australian average of 37. Median incomes in the area were considerably below the Australian average, with an average household income of $808 per week compared to $1,027 nationally.

Merriwa is primarily residential, but does contain some shopping and retail facilities. It relies on Clarkson and the nearby regional city of Joondalup for most other commercial and public services.

The Merriwa Plaza, within the Quinns Beach Estate area, accommodates a major Supa IGA supermarket branch, two bottle shops, a Chicken Treat branch and Metro Hardware, a local hardware store. In the north is a Puma service station, along with several other small shops and take-away restaurants. Near the Supa IGA is the Merriwa Tavern, a pub and restaurant that serves as the hub for nightlife in the suburb.

Six large parks are scattered throughout the suburb, many with additional sporting facilities. Addison Park features clubrooms and a function hall, while Dalvik Park leads onto the Alkimos Baptist College campus. Also nearby is the Jenolan Way Community Centre that is used for its function rooms and offices.

Brighton Beach Medical Centre in northern Merriwa provides medical services to the suburb's residents. Within the vicinity is a St John ambulance station, opened in 2008. The station operates 24 hours a day and serves all surrounding suburbs from Kinross to Butler.

Telephone services are provided by the Quinns Rocks telephone exchange.

Merriwa is linked by road to Perth by Marmion Avenue and Connolly Drive, two parallel arterial roads that run along Merriwa's western and eastern boundaries respectively. Hester Avenue in the south of Merriwa also links directly to Wanneroo Road in the east.

There is one backbone road, Baltimore Parade, that cuts through the middle of Merriwa from north to south and links the whole suburb together. The road originally looped westwards onto Marmion Avenue, but was re-aligned during the development of the Seagrove Estate to exit north onto Lukin Drive instead. The old alignment of the road was renamed Hughie Edwards Drive.

Cars are the preferred mode of transport in Merriwa, due to its outer-suburban location past the terminus of the Joondalup railway line.

The nearest railway station to Merriwa is Clarkson station immediately south, which provides a rail link to the Perth CBD via the Joondalup line. The suburb is also served by the 483 bus route, running from Butler to Clarkson railway station.

All content from Kiddle encyclopedia articles (including the article images and facts) can be freely used under Attribution-ShareAlike license, unless stated otherwise. Cite this article:
Merriwa, Western Australia Facts for Kids. Kiddle Encyclopedia.