Nowergup is a rural locality about 40 kilometres (25 mi) north of Perth, Western Australia (WA). It is in the local government area of the City of Wanneroo.

The suburb of Nowergup (sometimes spelled Nowgerup in earlier documents) takes its name from Lake Nowergup. The lake name was first recorded by Surveyor General John Septimus Roe in 1841, and is a Noongar Aboriginal word which possibly means "place of sweet water". It was approved as a suburb name in 1982.

Nowergup is bounded by Romeo Road/Karoborup Road to the north, the proposed Mitchell Freeway to the west, Pinjar Road to the east and Hester Avenue and Wattle Avenue to the south.

At the Australian Bureau of Statistics 2011 census, Nowergup had a population of 212 people living in 81 dwellings.

Nowergup is a sparsely populated agricultural suburb. Several plant nurseries, the Ocean View Tavern and the Nowergup Lake wetland and fauna sanctuary are situated along Wanneroo Road. The western strip between Wanneroo Road and the proposed Mitchell Freeway is approximately the northern half of the Neerabup National Park. The area also contains most of the Pinjar Pine Plantation, numerous sand and limestone quarries and a Water Corporation biosolids facility. Barbagallo Raceway, WA's premier motorsport facility, is located just beyond Nowergup's southern border.

The Nowergup Depot is located off Hester Avenue and marks the end of the Joondalup railway line. 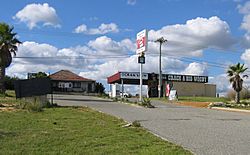 Nowergup was served by the Transperth 490 bus route between Clarkson train station and Two Rocks along Wanneroo Road. However, the service was relocated to Marmion Avenue on 14 December 2008 and the suburb is no longer served.

All content from Kiddle encyclopedia articles (including the article images and facts) can be freely used under Attribution-ShareAlike license, unless stated otherwise. Cite this article:
Nowergup, Western Australia Facts for Kids. Kiddle Encyclopedia.