Coolamon is a town in the Riverina region of south-west New South Wales, Australia. Coolamon is 40 kilometres (25 mi) north-west of Wagga Wagga and 506 kilometres (314 mi) south-west of Sydney via the Hume and Sturt Highways. The town is situated on the railway line between Junee and Narrandera. Coolamon had a population of 2,199 at the 2016 census and is 290 metres (950 ft) above sea level. It is the administrative and service centre for the local government area which bears its name—Coolamon Shire.

The original land where Coolamon now stands, prior to European settlement, was occupied by the Kamilaroi and/or Wiradjuri Aboriginal peoples.

A property "Coleman" was first settled there by a Mr J. Atkinson in 1848. The town was surveyed prior to the coming of the railway in 1881.

Cowabbie Post Office opened on 1 May 1881 and was renamed Ganmain on 1 July and Coolamon on 1 November of that year. 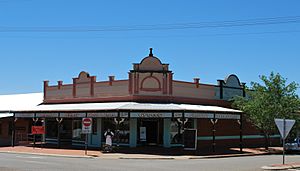 The name of Coolamon comes from the Aboriginal word for a basin-shaped wooden dish made and used by Australian Aboriginal people. In the area around the town are thousands of naturally occurring indentations in the ground called Coolamon Holes which fill with water.

Coolamon is in the wheat belt of New South Wales and is a leading state producer of wheat and chaff. Wheat was first grown in the area in the 1850s. In addition, turkeys and wool are produced and the area is noted for the quality and plumpness of its lambs.

The town's broad main street, which has been restored, retains much of its old world charm with its wrought-iron verandahs and awnings. Various bric-a-brac, antique shops, tourist coffee lounge, and a modern bread bakery and cafe invite passing tourists to stop and explore the town. The Up-to-Date store, designed by architect William Monks, has what is probably the only cash ball cash railway still in situ.

All content from Kiddle encyclopedia articles (including the article images and facts) can be freely used under Attribution-ShareAlike license, unless stated otherwise. Cite this article:
Coolamon, New South Wales Facts for Kids. Kiddle Encyclopedia.