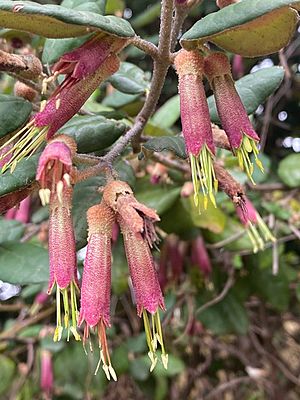 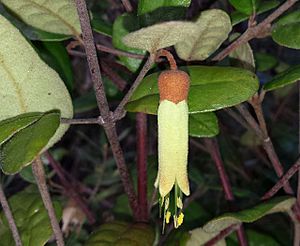 Correa lawrenceana, commonly known as mountain correa, is a species of shrub or small tree of the family Rutaceae and is endemic to Australia. It has elliptical to egg-shaped leaves arranged in opposite pairs and cylindrical, greenish yellow to red flowers usually arranged singly or in groups of up to seven in leaf axils with the stamens protruding beyond the end of the corolla.

This species was first described in 1834 by English botanist William Jackson Hooker who gave it the name Correa lawrenciana and published the description in his journal, The Journal of Botany. The specific epithet honours Tasmanian botanist Robert William Lawrence (1807-1833) who, together with Ronald Gunn, collected the plant material sent to Hooker. In 1998, Paul Wilson corrected the name to Correa lawrenceana to conform to the Tokyo Code.

The names of eight varieties are accepted at the Australian Plant Census:

Some varieties grade into each other, and the delineation between them is imprecise.

The flowers are presumed to be pollinated by either birds or bees.

Correa lawrenceana is suited to a cool, moist, partly shaded position and is known to tolerate frost and snow. It can be used as a screening plant and will attract honeyeaters to the garden. Plants are easily propagated from cuttings, whereas seed can be difficult.

All content from Kiddle encyclopedia articles (including the article images and facts) can be freely used under Attribution-ShareAlike license, unless stated otherwise. Cite this article:
Correa lawrenceana Facts for Kids. Kiddle Encyclopedia.