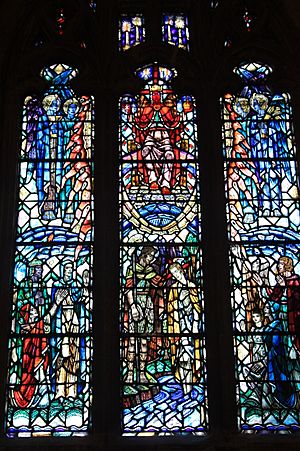 Corstorphine Old Parish Church, formerly St. John's Collegiate Church, is at the old centre of Corstorphine, a village incorporated to the west area of Edinburgh. Built in the 15th century, in the churchyard of a 12th-century or earlier chapel, the former collegiate church was listed category A by Historic Scotland on December 14, 1970.

David I granted the chapel at Corstophine to Holyrood Abbey in 1128. Before that, it was a dependent chapel of St Cuthbert's Church. By 1158, it had become a church, with altars to Saint Anne and the Holy Trinity. 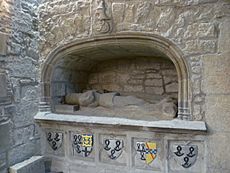 The foundation of the current church (on the inner eastmost wall) says the church was built in 1429 in the same churchyard as the earlier parish church, and was completed by 1437. The sandstone church was built with a tower and stone, octagonal spire, rectangular chancel, and a nave with transepts. This included the absorption of earlier Gothic features from the previous building and the erection of the characteristic barrel vaults, which may have concluded by 1436. 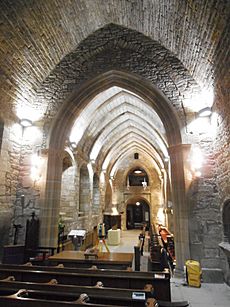 The nave of the church showing the concrete vaults, which replaced the original stone vaults in 1905

The remodeling of the more sophisticated, pre-existing vault like the one in the south transept shows a structurally slightly arbitrary pattern of two semi-quadripartite arrangement of ribs rising from a springing point at the centre of the bays.

In 1634, the collegiate church was dissolved and in 1646 the building became the parish church. At that time the 12th-century church was razed and a new aisle was added to the collegiate fabric. Stones from the former church were used to built the porch. In 1828, a restoration by architect William Burn resulted in a two-storey sacristy, renovation of the nave, removal of a 17th-century aisle, and building of a new aisle and transept.

The east choir and the adjacent sacristy are the only original roofs that survived and the vaults of the nave and aisle were re-made in precast concrete ribbed panels during the restoration from 1903 to 1905 by George Henderson.

The church has Scottish heraldic panels and pre-Reformation relics. James Ballantine supplied the Victorian stained glass and Gordon Webster and Nathaniel Bryson supplied the 20th-century windows. Leonardo da Vinci's Last Supper was the inspiration for the heads on the carved corbels made by William Birnie Rhind. On the grounds are a war memorial, vault and gatehouse, surrounded by a boundary wall and cast iron gates.

The ancient stone font, in the south transept, was brought from Gogar church in 1955.

The church includes several windows by the Bannantine Brothers, two by Nythaniel Bryson and one by Douglas Strachan.

Also of note is the memorial window to the women's rights campaigner Jessie Chrystal Macmillan.

All content from Kiddle encyclopedia articles (including the article images and facts) can be freely used under Attribution-ShareAlike license, unless stated otherwise. Cite this article:
Corstorphine Old Parish Church Facts for Kids. Kiddle Encyclopedia.