The Cowal Highland Gathering (also known as the Cowal Games) is an annual Highland games held in the Scottish town of Dunoon, on the Cowal peninsula in Argyll and Bute, over the final weekend in August.

The first record of an organised Highland games in the town is in 1871, the same year as the Argyllshire Gathering in Oban started. In subsequent years games were held at New Year. The organisation of the Cowal events and other games around Scotland was due to a wide interest in Highland sports, partly stemming from Queen Victoria's love of Scotland.

The event that would evolve into the Cowal Gathering was first held on 11 August 1894, and organised by local man Robert Cameron.

1906 saw the introduction of a pipe band competition for Army bands, at the suggestion of Malcolm McCulloch. 25 bands entered in 1909, the first year that civilian bands were allowed to compete. The Argyll Shield, donated in 1906 by Princess Louise, Duchess of Argyll, is still awarded to the winning band in the Grade 1 competition.

The easy access of Dunoon by paddle steamer from Glasgow contributed to popularity of the Games. The Games also featured in early BBC television broadcasts.

The global COVID-19 pandemic saw the cancelling of the highland gathering for 2020 and 2021, events normally attracting in excess of 1500 competitors annually. This was due both to travel restrictions for international participants, as well as uncertainty health-wise. A 'virtual gathering' was to be held for 2021, following a similar 2020 action.

Panoramic view of the 2014 event

Following discussions between the Gathering Committee and the RSPBA, it was decided that after 2013 Cowal would lose its status as a major competition due to difficulties accommodating the number of bands. The pipe band competition continues to be held but with a reduced number of entrants.

The Games hosts open graded pibroch, march, and strathspey and reel competitions, as well as juvenile and local restricted competitions. 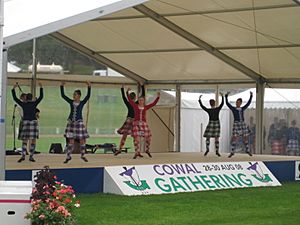 The Games features a variety of traditional Highland games events, including the shot put, caber toss, weight throw and hammer throw, as part of an international competition. The shot put is done with both a standard 16 pounds (7.3 kg) shot and with the naturally formed 34 pounds (15 kg) Cowal Stone.

There is a 5-kilometre fun run and a hill race from the stadium to the top of Tom Odhar and back again, and since 2007 there has been a Scottish Backhold wrestling competition.

All content from Kiddle encyclopedia articles (including the article images and facts) can be freely used under Attribution-ShareAlike license, unless stated otherwise. Cite this article:
Cowal Highland Gathering Facts for Kids. Kiddle Encyclopedia.