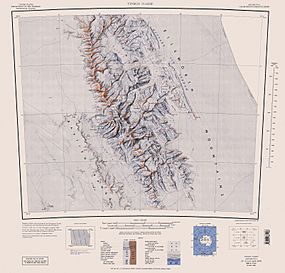 Craddock Massif is a mountain massif in the Sentinel Range of the Ellsworth Mountains, in the Chilean claim of West Antarctica.

Sentinel Range was first sighted and photographed from the air on November 23, 1935, by Lincoln Ellsworth. The entire range, including Craddock Massif, was mapped by the United States Geological Survey from aerial photography taken by the U.S. Navy, 1958–61.

This massif was originally named "Mount Craddock" by the Advisory Committee on Antarctic Names (US-ACAN) in 1965, but subsequent maps limited the name to the massif's southernmost peak, a modification that was adopted by US-ACAN in 2006 when it approved the name Craddock Massif. The massif is named after Professor J. Campbell Craddock (1930–2006), the leader of the 1962–63 University of Minnesota geological expedition to the Sentinel and Heritage Ranges of the Ellsworth Mountains.

All content from Kiddle encyclopedia articles (including the article images and facts) can be freely used under Attribution-ShareAlike license, unless stated otherwise. Cite this article:
Craddock Massif Facts for Kids. Kiddle Encyclopedia.