Berube played 1054 NHL regular season games between 1986 and 2003. He was known as an enforcer in the NHL and amassed 3,149 penalty minutes in his career, good for seventh on the all-time list.

Berube was signed as an undrafted free agent by the Philadelphia Flyers on March 19, 1986. He made his NHL debut on March 22, 1987, recording 16 penalty minutes which included two fighting majors, in a 3–1 Flyers win over the Pittsburgh Penguins. He remained with the Flyers through the end of the regular season and also played in five playoff games during the Flyers' run to the 1987 Stanley Cup Finals. Berube cemented his place in the Flyers' line-up during the 1988–89 season and finished in the top ten in penalty minutes during the next two seasons.

Following the 1990–91 season, Berube was traded three times in a span of a little over seven months, twice in the off-season. The Flyers traded him to the Edmonton Oilers along with Craig Fisher and Scott Mellanby for Dave Brown, Corey Foster, and Jari Kurri on May 30. Four months later he was traded to the Toronto Maple Leafs along with Glenn Anderson and Grant Fuhr for Vincent Damphousse, Peter Ing, Luke Richardson, and Scott Thornton on September 19. Berube played the first half of the 1991–92 season with Toronto before he was traded again on January 2, 1992 to the Calgary Flames along with Alexander Godynyuk, Gary Leeman, Michel Petit, and Jeff Reese for Doug Gilmour, Jamie Macoun, Kent Manderville, Ric Nattress, and Rick Wamsley.

Berube remained with the Flames through the end of the 1992–93 season. He was traded on June 26, 1993 to the Washington Capitals for a fifth-round draft choice in the 1993 NHL Entry Draft. He spent the next six seasons with the Capitals, notably playing in every playoff game during Washington's run to the 1998 Stanley Cup Finals.

During a November 1997 game against the Florida Panthers, Berube called Panthers' forward Peter Worrell, who is black, "a monkey." Berube claimed the remark was not racially motivated and he apologized to Worrell a day after the game. The NHL suspended Berube for one game.

Berube returned to the Flyers in 1999 during the trade deadline. He saw his last Stanley Cup playoff action on the ice in 2000. In game four of the Eastern Conference Finals he scored the game-winning goal to put the Flyers up 3–1 in the series against the New Jersey Devils, but the Flyers lost the next three games and the series.

Berube split the next three seasons between the Capitals, New York Islanders, and the Flames. He ended his playing career as a player-assistant coach with the Philadelphia Phantoms, the Flyers American Hockey League affiliate, during the 2003–04 season.

Berube was named the head coach of the Philadelphia Phantoms, the Flyers' affiliate in the American Hockey League, prior to the 2006–07 AHL season. However, on October 23, 2006, Berube was promoted to the Flyers' NHL coaching staff after a major reorganization in the franchise. On October 22, 2006, Bob Clarke had resigned from his position as general manager of the Flyers, and head coach Ken Hitchcock was released from his duties. John Stevens, formerly assistant coach, was named the Flyers' new head coach, and Berube was designated to replace him. For the 2007–08 season, Berube returned to the Phantoms as head coach. On October 7, 2013, Berube was named head coach of the Philadelphia Flyers following an 0–3–0 start. The team improved their play following the change to Berube, and clinched a spot in the 2014 NHL playoffs. On April 17, 2015, Berube was relieved of his coaching duties by Flyers general manager Ron Hextall.

On June 29, 2016, Berube was named the head coach of the Chicago Wolves in the American Hockey League, the affiliate of the St. Louis Blues.

On June 15, 2017, Berube was named the assistant head coach of the St. Louis Blues. On November 19, 2018, the Blues fired head coach Mike Yeo and named Berube interim coach for the rest of the season. 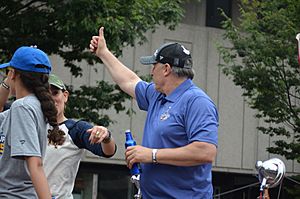 Berube during the 2019 Stanley Cup parade

The Blues struggled at first under Berube's watch; at the start of the 2019 calendar year, they were 15–18–4 and last in the league standings. However, they improved through the remainder of the season, going 30–10–5, including a franchise-record 11-game winning streak. As the third seed in the Central Division, they advanced to the Stanley Cup Finals for the fourth time in franchise history, and the first time since 1970. The Blues later won the series 4–3 over the Boston Bruins, capping off Game 7 with a 4–1 win, earning the Blues their first Stanley Cup title in franchise history and Berube his first Stanley Cup championship as a player or coach.

Berube became the second interim head coach in NHL history to guide his team to a Stanley Cup title. Berube shares this distinction with Blues senior advisor Larry Robinson, who accomplished the feat 19 years earlier with the New Jersey Devils.

On April 26, 2019, Berube, Jon Cooper, and Barry Trotz were announced as the finalists for the Jack Adams Award. On June 24, the Blues dropped the "interim" tag from Berube's title and officially named him as the 26th head coach in franchise history, with a three-year contract.

All content from Kiddle encyclopedia articles (including the article images and facts) can be freely used under Attribution-ShareAlike license, unless stated otherwise. Cite this article:
Craig Berube Facts for Kids. Kiddle Encyclopedia.