Cringila is a densely populated southern suburb in the city of Wollongong, New South Wales, Australia. The suburb is bounded by Berkeley, Unanderra, Lake Heights and Warrawong.

The suburb is planned on a north-south residential/commercial strip and the east west streets that adjoin it, making a rectangular pattern.

Cringila Community Park is a 78 ha site purchased by Wollongong City Council after residents defeated a proposal by BHP to use the land as a dump for industrial waste. Its main purpose is to regenerate the local area's natural wildlife. Surrounding Cringila's primary school is a protected rain forest.

Cringila railway station in on the Port Kembla Branch of the South Coast railway line. 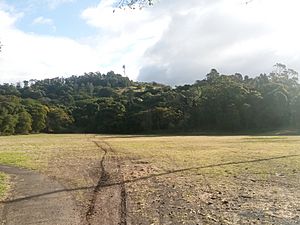 Cringila also has a local football (soccer) team which participates in the local Illawarra Premier League. They are supported strongly by the Macedonian community of Cringila and Wollongong. They play their local games at their home ground at John Crehan Park, Merrett Avenue, Cringila. In 2008 Cringila had finished 4th in the local Illawarra Premier League and also won the Corrimal League cup which also led to greater success in winning the Bert Bampton Cup. Cringila Lions have a strong rivalry with Wollongong United also backed heavily by the Macedonian community. 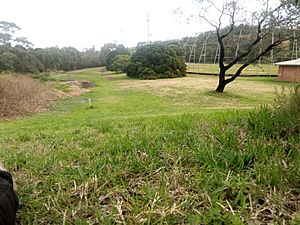 All content from Kiddle encyclopedia articles (including the article images and facts) can be freely used under Attribution-ShareAlike license, unless stated otherwise. Cite this article:
Cringila, New South Wales Facts for Kids. Kiddle Encyclopedia.