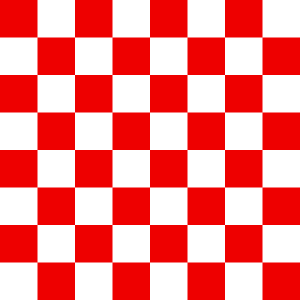 Escutcheon in the Seal of the Kingdom of Croatia

The Croatian checkerboard or chequy (Croatian: šahovnica) is the national symbol of Croatia. It is the main shield of the Croatian coat of arms. On top of the main shield is the crown with five smaller shields. The squares in the šahovnica are always arranged the right way. They are colored red and white. It is considered to be one of the oldest national symbols in Europe.

There is a legend, probably from the 19th century, which talks about how the Croatian king Držislav, captured by the Venetians, played a chess match. His opponent was Doge Pietro II Orseolo. He won and became free, and in some versions of the story he also got power over the Dalmatian cities. Then he put the chessboard in his coat of arms.

All content from Kiddle encyclopedia articles (including the article images and facts) can be freely used under Attribution-ShareAlike license, unless stated otherwise. Cite this article:
Croatian checkerboard Facts for Kids. Kiddle Encyclopedia.