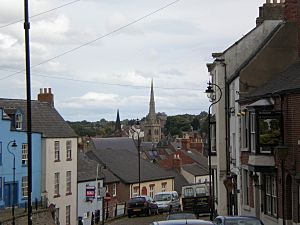 Crossgate is a small area of housing that sits above North Road but below the Neville's Cross area of Durham. It is predominantly occupied by students at Durham University who favour the area due to its proximity to the university departments in the Elvet and Palace Green areas of the city.

Crossgate boasts two pubs (Ye Olde Elm Tree and The Angel), a working men's club and a pancake cafe, all of which exist as part of a cheerful community housed in pretty late Victorian brick terraced houses. St Margaret's Church, built in the 12th century, stands on a small bluff at the foot of Crossgate; its churchyard, extending from South Street up to Margery Lane, provides a significant green space in the Crossgate quarter of Durham.

Crossgate is one of the oldest centres of Durham. In the Middle Ages, there was a borough separate from the borough of Durham, called Crossgate or Old Borough, and comprising Crossgate itself, Allergate and South Street; it was more or less coterminous with the chapelry of St Margaret of Antioch. It was under the lordship of Durham Priory and had its own borough court, but had no market of its own. Crossgate was first joined to the main centre of Durham, where the markets were held, when Bishop Flambard built Framwellgate Bridge, about the year 1128. From being a chapelry of the parish of St Oswald's, St Margaret's was made an independent parish in 1431, and St Margaret's Church promoted from a chapel of ease to a parish chuirch. The earliest parts of the church are Norman, The area of residence shrank considerably during the fourteenth and fifteenth centuries, but grew again rapidly during the nineteenth century. Crossgate's present largely residential character is at least partly the result of the nineteenth-century construction of North Road as a principal shopping street.

All content from Kiddle encyclopedia articles (including the article images and facts) can be freely used under Attribution-ShareAlike license, unless stated otherwise. Cite this article:
Crossgate, County Durham Facts for Kids. Kiddle Encyclopedia.