Crosshaven (Irish: Bun an Tábhairne) is a village in County Cork, Ireland. It is located in lower Cork Harbour at the mouth of the River Owenabue, across from Currabinny Wood. Originally a fishing village, from the 19th century, the economy of the area became more reliant on a growing tourism industry.

The modern Irish name for Crosshaven village is Bun an Tábhairne. Tábhairne is related to the English word "Tavern" and Bun refers to "the beginning" or "bottom of the...". The name could be linked to a public house situated on the west side of the current village.

Crosshaven was originally a Viking settlement, part of what was known as the 'Ostman's Tancred', after Cork city became a fortified English stronghold.

According to local folklore, Sir Francis Drake sailed up the River Owenabue, while taking refuge from the Spanish Armada. A point in the river where he is alleged to have hidden is known as Drake's Pool.

The local secondary school, Coláiste Mhuire, was founded by an aunt of James Joyce, and the town is mentioned twice in Joyce's novel Ulysses.

Nearby coastal artillery and military forts, Fort Templebreedy and Camden Fort Meagher were British outposts until the Treaty Ports installations were relinquished in 1938. Camden is located on the headland of Rams Head and is occasionally open to the public. 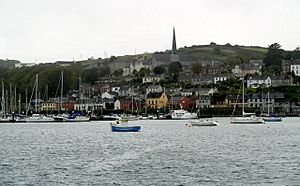 View of Crosshaven from Curraghbinny

Originally a fishing village, in the late 19th and into the 20th century, tourism became important to the town, which has 5 beaches within a 2-mile radius. The area saw an increase in 'holiday homes' in the mid-20th century, accommodating families from Cork city who stayed locally in the summer months - some of these temporary cabins were initially built using very large packing crates from the Ford factory in Cork.

Tourism attractions in the town included Piper's funfair (known as "the merries"), a nightclub called The Majorca (now closed), a cinema (also since closed), and the Cockleshell (now an arcade called La Scala). Today Crosshaven is becoming a commuter town for Ringaskiddy and Cork city.

In the 1970s and 1980s, environmental concerns came to the fore as a large industrial estate was built across the river in Ringaskiddy. It has been host Pfizer and GlaxoSmithKline and other pharmaceutical companies.

The town is situated on the R612 regional road, and served by a single bus from Cork city centre via Carrigaline. Cork Airport is the nearest airport, and there are also ferries to France from nearby Ringaskiddy.

Crosshaven railway station was the southern terminus of the Cork, Blackrock and Passage Railway (which originally opened in 1850, but only extended south of Passage West at the start of the 20th century). The station opened on 1 June 1904, and finally closed on 1 June 1932.

Notable residents have included the father of Bob Geldof, who was manager of the local Grand Hotel for a time, and Chelsea FC's all-time 2nd greatest scorer, Bobby Tambling.

Crosshaven has been twinned with Pleumeur-Bodou, France, since 1992. 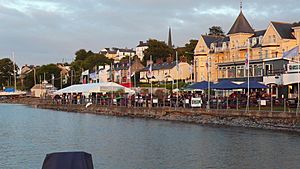 The village is home to Royal Cork Yacht Club (RCYC) which has had its headquarters in the village since 1966. The club was established at the Cove of Cork (now Cobh) in 1720 and holds the title of the oldest in the world, according to the Guinness Book of World Records. In 1966 the RCYC merged with the Royal Munster Yacht Club and made the Royal Munster's club house its headquarters. The biennial Regatta of Cork Week (formerly Ford Cork Week due to the sponsorship of the Ford Motor Company) draws many competitors and upwards of 15 thousand spectators to each competition.

Crosshaven AFC is one of the oldest soccer clubs in Cork, and was founded in 1898. The club has two pitches, an all-weather training area and four-dressing-room clubhouse.

Crosshaven RFC (Rugby Union Football Club) was founded in 1972, and has two pitches, an all-weather pitch and a gym located at Myrtleville Cross in Crosshaven.

The local Gaelic Athletic Association club is Crosshaven GAA, which has teams playing both hurling and Gaelic football.

Crosshaven Triathlon Club meets for training on the walkway, with swimming at Myrtleville.

All content from Kiddle encyclopedia articles (including the article images and facts) can be freely used under Attribution-ShareAlike license, unless stated otherwise. Cite this article:
Crosshaven Facts for Kids. Kiddle Encyclopedia.