Crowland (modern usage) or Croyland (medieval era name and the one still in ecclesiastical use; cf. Latin: Croilandia) is a town in the South Holland district of Lincolnshire, England. It is situated between Peterborough and Spalding. Crowland contains two sites of historical interest, Crowland Abbey and Trinity Bridge. 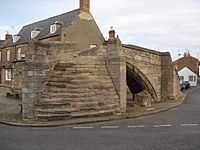 The town's two historical points of interest are the ruined medieval Crowland Abbey and the 14th-century three-sided bridge, Trinity Bridge, which stands at its central point and used to be the confluence of three streams.

In about 701 a monk named Guthlac came to what was then an island in the Fens to live the life of a hermit. Following in Guthlac’s footsteps, a monastic community came into being here, which was dedicated to Saint Mary the Virgin, Saint Bartholomew and Saint Guthlac in the eighth century. The Croyland Chronicle, an important source for medieval historians, is believed to be the work of some of the monastery's inhabitants. Marshland beside the island was drained and a town gradually grew up near the abbey.

During the English Civil War, the town was captured after a short siege by Parliamentarian forces in 1643.

The surrounding agricultural area suffered from extensive flooding in 1947 as the River Welland and the surrounding drain network was overwhelmed with meltwater. A flood defence bank, West Bank, still exists, forming the north-west perimeter of the village and eastern flank of the River Welland's flood plain.

The Great Northern and Great Eastern Joint Railway crossed the north-east part of the parish until the 1980s. It passed near De Key's Farm to the east and Martin's Farm to the north. Postland railway station was near Postland House. 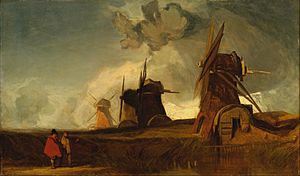 Fen Bridge, where the B1166 crosses the River Welland 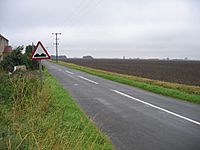 Crowland is nearer to the outskirts of Peterborough than Spalding, and (similar to other settlements of the Welland) is less than 1 mile (1.6 km) north of the boundary with the City of Peterborough. The main road is the A16, which provides connections with Spalding to the north and Peterborough to the south (via the A47). The east-west B1166 connects with Deeping St. James, the north side of the Welland to the west and Holbeach Drove to the east, and Thorney is accessed via the B1040 to the south-east.

The civil parish extends south as far as Kennulph's Drain. This is the boundary with a small section of Newborough, which encompasses the parish adjacent south, that of Borough Fen. The A16 crosses the former A1073 (now an unclassified local road) from east to west just south of the Alderlands farm and campsite. The parish boundary follows a drain westwards and the A16 between Kennulph's Farm and Poplar's Farm. It follows Speechley Drove to the north and to the west of Eardley Grange, bordering Borough Fen. It crosses the east-west Corporation Bank and then borders Peakirk for a few hundred yards.

At Kennulph's Stone, it no longer borders Peterborough but South Kesteven and the parish of Deeping St. James for about 220 yards (200 m). On the north side of the Welland, to the west of Wards Farm, and on the B1166, it no longer borders South Kesteven, but the parish of Deeping St. Nicholas (in South Holland). The boundary follows Raisen's Dyke to the north, crossing Crowland Common. The north-west corner of the parish has a 440 yards (400 m) section of the Peterborough to Lincoln Line.

The boundary follows eastwards, to the south, South Drove Drain and just to the north of Peacock's Farm and Law's Farm. The boundary crosses the Welland, then follows the New River to the east, to the north of Cloot House and Bank House Farm. To the north of St Guthlac's Cross, it meets Spalding Road (former A1073) and borders Cowbit, and follows the north side of Queen's Bank, crossing the A16. Just south of here, to the west of Spalding Road, is Crowland Airfield, home of a gliding club. For 880 yards (800 m) north of Queen's Bank Farm, it borders the large parish of Weston. Eastwards across to Middlemoor Farm, it borders Moulton. From the area south of Little Postland, it borders the large parish of Whaplode (Whaplode Drove).

It crosses the B1166 at Shepeau Stow, which includes a few houses in the parish on the west side of Back Bank, although the village is part of Whaplode parish. The area, in the parish, to the west of here was known as Great Postland. The boundary follows Dowsdale Bank, and just north of Dowsdale Plantation, the parish meets the City of Peterborough, and the parish of Thorney at the Lincolnshire-Peterborough boundary. It follows the Old South Eau under Fall's Bridge, near Empson's Farm. A footpath follows the boundary to where it crosses the B1040 at Nene Terrace, following the west side of the B1040 for 330 yards (300 m) where it meets the (Peterborough) parish of Newborough.

From 1894 the parish, being the only part of the Peterborough Rural Sanitary District in Lincolnshire, formed its own Crowland Rural District. This was merged into Spalding Rural District under a County Review Order in the 1930s. It has formed part of the South Holland district since April 1974.

Crowland falls within the drainage area of the Welland and Deepings Internal Drainage Board.

The Crowland Ponds Nature Reserve is north of the town, next to the west side of the Welland.

The town currently has one school, South View Primary, which has moved from its former home on Reform Street to the much larger former St Guthlac School site on Postland Road in September 2014.

Crowland's former secondary school was named The St Guthlac School after the abbey's founder. It was situated at the junction of the B1166 and B1040. Lincolnshire Country Council made the decision at the begin of July 2011 that The St Guthlac School would close as part of the creation of the University Academy Holbeach, to be situated on the site of the former George Farmer Technology and Language College in Holbeach.

All content from Kiddle encyclopedia articles (including the article images and facts) can be freely used under Attribution-ShareAlike license, unless stated otherwise. Cite this article:
Crowland Facts for Kids. Kiddle Encyclopedia.