The area northwest of the Fabian Way contains a small settlement at Elba Crescent and Baldwins Crescent and areas of industry and commerce. The 1940s Swansea Bay Museum is located in Elba Crescent. The museum contains exhibits showing what life was like in the Swansea Bay area during and just after World War II. 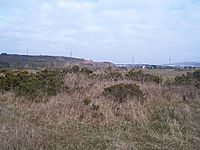 The undeveloped salt marsh area south of the Fabian Way and north Jersey Marine Beach is a designated biological Site of Special Scientific Interest and is one of the last remaining places of the Swansea Bay coastline that has remained unmodified by industrial development. The area contains sand dunes, a salt marsh and carr woodland. The burrows also contain a rare orchid - the Fen Orchid, Liparis loeselii. The 1,000-acre (400 ha) site was acquired by St. Modwen from BP in November 2009 and will be kept as a protected leisure destination. 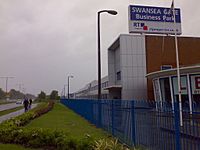 Industrial sites in the northeastern part of the area include the Linamar Elba Works site, the Gower Chemicals site, and Network Rail's Swansea Burrows yard.

Part of the Visteon industrial site was acquired by RT Properties in 2007 with Visteon consolidating their operations in the Elba Works plant. The part of the site which was sold includes factory premises and the offices and Canteen buildings fronting the Fabian Way. The plant was originally built in 1959 for the Prestcold fridge company and was later acquired by Ford who manufactured car axle and transmission components there. Ford later transferred the site to Visteon. The 30-acre (12 ha) site acquired by RT properties has been re-developed as a business park branded Swansea Gate Business Park. The 24,600-square-metre (265,000 sq ft) car parts factory was later closed and is now used as a film studio.

BP has a storage site south east of the Fabian Way adjacent to Swansea Docks. Amazon.co.uk has a 33-acre (13 ha) distribution centre just west of the Jersey Marine roundabout on the Fabian Way. 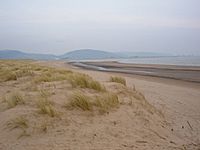 The 18 hole links golf course of the Swansea Bay Golf Club lies to the east of Jersey Marine village. It is the oldest golf club in the Swansea area. The marina of the Monkstone Sailing and Cruising Club is located at Earlswood in the east of the area, under the M4 Motorway viaduct, with access to the estuary of the River Neath.

The Fabian Way is an arterial road which connects Swansea city centre with the M4 Motorway at junction 42. It forms a stretch of the A483 road. It is about 4.7 miles (7.6 km) long and cuts through the centre of Crymlyn Burrows in the unitary authorities of Swansea and Neath Port Talbot. The Fabian Way is a dual carriageway for its whole length. The speed limit of the Fabian Way is 30 mph (48 km/h) between Swansea city centre and Port Tennant, after which the speed limit rises to 50 mph (80 km/h) until the Jersey Marine traffic lights (Currently a 30 mph (48 km/h) limit is in force during road alterations for the University Campus. There are average speed cameras installed). The road is a standard national speed limit dual carriageway between Jersey Marine and the junction with the M4. It is considered to be the main entrance to Swansea City Centre.

A new residential development was approved in 2009 for the area north of Elba Crescent, consisting of 33 houses with a planned total of 100 and a new business area.

Swansea University has built a 100-acre (40 ha) site close the Fabian Way as a second campus and innovation park. The development is on land previously used by BP as a petrochemicals transit site which BP gifted to the university. The site stretches from Swansea Docks to Crymlyn Bog. Funding for the project was made available in September 2012 from the Welsh Government and the European Investment Bank. Construction work started on the site in 2013 and the main phase completed in 2015, with accommodation blocks still being added. Companies which intend to establish research facilities at the site include Rolls-Royce, Hewlett-Packard, Tata, Bell Labs and BAE.

All content from Kiddle encyclopedia articles (including the article images and facts) can be freely used under Attribution-ShareAlike license, unless stated otherwise. Cite this article:
Crymlyn Burrows Facts for Kids. Kiddle Encyclopedia.