Swansea Docks is the collective name for several docks in Swansea, Wales. The Swansea docks are located immediately south-east of Swansea city centre. In the mid-19th century, the port was exporting 60% of the world's copper from factories situated in the Tawe Valley. The working docks area today is owned and operated by Associated British Ports as the Port of Swansea and the northern part around the Prince of Wales Dock is undergoing re-development into a new urban area branded the SA1 Swansea Waterfront.

Docks which have existed or still exist in the complex include:

Construction began on the South Dock in 1852 by a private company. It was built on a site west of the River Tawe, just south of the North Dock and was not completed until 1859. The South Dock was closed in 1971 and was redeveloped in the 1980s. The dock itself became the Swansea Marina and the land around the dock was developed as the Maritime Quarter residential area. 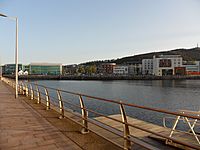 At the same time the King's dock was being built, a breakwater was constructed further south of the King's dock which enclosed a large body of water covering some 151 acres (61 ha). This body of water was opened in 1920 as the Queen's Dock after oil handling facilities were built to handle imports for the nearby BP oil refinery at Llandarcy and petrochemical plant at Baglan Bay. Usage of the Queen's Dock reached its peak in the 1950s when oil imports and exports reached around 8 million tonnes per year. Since the closure of the oil plants at Baglan Bay and Llandarcy, the Queen's Dock was rendered obsolete as an oil handling facility. The Queen's dock is now used for mussel farming. 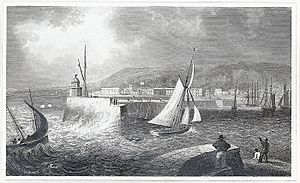 Due to increases in industrial output and in trade in copper, zinc, iron and tinplate combined with the developments in shipping (big steamships were replacing smaller sailing vessels) by the late 19th century Swansea's harbour was in desperate need of expansion. The Swansea Harbour Trust (SHT) commissioned the construction of the Prince of Wales Dock, the first on the east side of the river. Opened in 1881 by the Prince and Princess of Wales (later Edward VII and Queen Alexandra), it was completed in 1882, and expanded in 1898. The North Quay frontage was let to the Great Western Railway, the Neath and Brecon Railway and the Rhondda and Swansea Bay Railway, which linked the Dulais Valley and Rhondda Valley coalfields directly with the docks. In addition to shunting locomotives operated by the SHT, further engines were provided by Powlesland and Mason from 1903 onwards.

The Port of Swansea is an Atlantic shipping port operated by Associated British Ports which comprises the King's Dock, Queen's Dock, two dry docks and a roll on/roll off ferry terminal in the River Tawe.

There is a roll on/roll off ferry terminal in the western part of the docks. Between 1987 and 2006, a regular passenger and car ferry to Ringaskiddy in County Cork, Ireland departed from here. The ferry was operated by a company called Swansea Cork Ferries. The ferry service was suspended from 2007 A website and online campaign / e-petition was started in an attempt to highlight the effect that the loss of the Swansea Cork ferry was having on Swansea and the South-West of Ireland. In April 2009, a newly formed co-operative purchased a new vessel to provide a service between Swansea and County Cork. Sailings commenced on 10 March 2010 but ceased as untenable on 2nd February 2011.

In written evidence presented to the Welsh Assembly's Enterprise and Learning Committee in January 2008, Swansea University stated that it was "at an advanced stage of discussion" about a new 'Innovation Campus' on a second site. On 20 March 2008, the university announced that it would conduct a more detailed examination and feasibility assessment of a 100-acre (0.40 km2) site off Fabian Way, covering an area from the docks and the former BP plant to the Site of Special Scientific Interest at Crymlyn Bog. The new campus could be home to Engineering, Computing, Telecommunications, the Business and Law Schools and a range of offices for large and small companies.

All content from Kiddle encyclopedia articles (including the article images and facts) can be freely used under Attribution-ShareAlike license, unless stated otherwise. Cite this article:
Swansea docks Facts for Kids. Kiddle Encyclopedia.