Crystal City is an urban neighborhood in the southeastern corner of Arlington County, Virginia, south of downtown Washington, D.C.. Due to its extensive integration of office buildings and residential high-rise buildings using underground corridors, travel between stores, offices, and residences is possible without going above ground; thus, a large part of Crystal City is an underground city.

Crystal City is centered along a stretch of Jefferson Davis Highway (U.S. 1), just south of The Pentagon, just east of Pentagon City, and within walking distance to the west of Ronald Reagan Washington National Airport. Characterized as one of many "urban villages" by Arlington County, Crystal City is almost exclusively populated by high-rise apartment buildings, corporate offices, hotels, and numerous shops and restaurants. There is also an extensive network of underground shopping areas and connecting corridors beneath Crystal City.

Crystal City has a station on the Washington Metro Blue and Yellow Lines, and another on the Virginia Railway Express commuter train system.

The layout of Crystal City was considered avant-garde at the time of construction, with superblocks bounded by arterial and circulating roads, and with pedestrian traffic and the businesses serving it relocated from the streets to the pedestrian tunnels. However, Crystal City has been redesigned to give it a more traditional, urban feel, with restaurants at street level, and with traffic patterns changed to make streets like Crystal Drive function as city streets, rather than as circulating roads.

As a consequence of Crystal City's extensive integration with both office buildings and residential high-rise buildings, it is possible for most residents living to the east of Route 1 to traverse from one end to the other (roughly north-south), performing any shopping or dining along the way, entirely underground, thus making a large part of Crystal City an underground city. This is of particular importance during inclement weather. 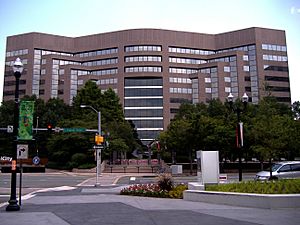 Before development by the Charles E. Smith Co., the area was mostly composed of industrial sites, junkyards, and low-rent motels. A drive-in theater existed at the intersection of Jefferson Davis Highway and 20th Street South between 1947 and 1963 and is visible on aerial photos of the period. The RF&P railroad tracks were moved closer to National Airport to accommodate more space for development.

Though it is not a planned community, it unfolded in much that fashion after construction began on the first few condominiums and office buildings in 1963. The name "Crystal City" came from the first building, which was called Crystal House and had an elaborate crystal chandelier in the lobby. Every subsequent building took on the Crystal name (e.g., Crystal Gateway, Crystal Towers) and eventually the whole neighborhood. Crystal City is largely integrated in layout and extensive landscaping, as well as the style and materials of the high rise buildings, most of which have a speckled granite exterior.

Crystal City's Crystal Underground shopping mall opened in September 1976. Billed as a "turn-of-the-century shopping village," it featured antique leaded glass shop windows and cobblestone "streets." Emphasis was on locally owned and operated businesses and personalized service. The largest retail outlets were a 12,000-square-foot (1,100 m2) Jelleff's women's store, Larimers gourmet grocery and delicatessen, and a Drug Fair. The mall also featured an "Antique Alley" with small antique and craft stores. At opening there were 40 stores, with an anticipated expansion of 150,000 square feet (14,000 m2) with 70 more shops including the Crystal Palace food court.

On June 26, 2004, the Crystal City area underwent a number of changes. Many buildings' addresses were changed on this date, several major roads were turned into two-way streets, and many of the markings for the traditional building names (e.g., "Crystal Gateway 1") were removed. As a result, local residents may refer to building names that are difficult for visitors to find.

All content from Kiddle encyclopedia articles (including the article images and facts) can be freely used under Attribution-ShareAlike license, unless stated otherwise. Cite this article:
Crystal City, Arlington, Virginia Facts for Kids. Kiddle Encyclopedia.