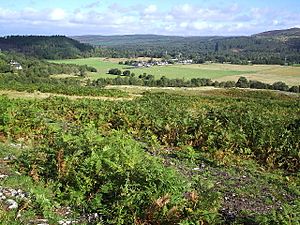 It lies west of Ardgay, beside the Kyle of Sutherland, where several rivers converge to flood into the sea through lush water meadows.

James Graham, 1st Marquess of Montrose was defeated here, at the Battle of Carbisdale, in 1650, in what proved to be the beginning of his end.

In March 1650 Montrose landed in Orkney from Denmark to take the command of a small force which he had sent on before him. Crossing to the mainland, he tried in vain to raise the clans, and on 27 April he was surprised and routed at the Battle of Carbisdale in Sutherland. His forces were defeated in battle but he cowardly fled, leaving his men behind to be slaughtered. After wandering for some time he was surrendered by Neil MacLeod of Assynt at Ardvreck Castle, to whose protection, in ignorance of MacLeod's political enmity, he had entrusted himself. He was brought a prisoner to Edinburgh, and on 20 May sentenced to death by the parliament. He was hanged on the 21st, with Wishart's laudatory biography of him put round his neck. To the last he protested that he was a real Covenanter and a loyal subject.

For a number of years Culrain was also the home of the Scottish sculptor Ann Henderson (RSA).

Buses between Inverness and Lairg stop in Ardgay and Bonar Bridge.

All content from Kiddle encyclopedia articles (including the article images and facts) can be freely used under Attribution-ShareAlike license, unless stated otherwise. Cite this article:
Culrain Facts for Kids. Kiddle Encyclopedia.