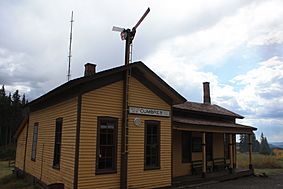 Cumbres Pass, elevation 10,022 ft (3,055 m), is a mountain pass in the San Juan Mountains in Colorado, United States. The pass is traversed by State Highway 17 and the Cumbres and Toltec Scenic Railroad. The highway has a moderate 5.8% approach on the north side and a gentler, 4% approach on the south side. It is rarely closed in winter and does not normally cause problems for vehicles, since the road is not a major through highway.

The railroad line was built in the early 1880s by the Denver & Rio Grande Railroad as part of their San Juan Extension line from Alamosa, Colorado to Durango, Colorado. The railroad has a steep (for a railroad) 4% grade approaching from the west, so additional helper locomotives were usually run (and often still are) on trains from Chama to Cumbres Pass. The facilities at the pass were built by the railroad to support the turning of the helper locomotives for their return to Chama, and provide water to locomotives after the climb. Some of the structures at the pass, including the station building, were demolished when the highway was realigned. Regular passenger service was provided by the San Juan Express, running from Alamosa to Durango, and was discontinued in 1951, although numerous rail-fan specials operated over the line until the Fall of 1967. Freight service on the line ended in 1968 and since 1970 the railroad from Chama to Antonito has been owned and operated by the Cumbres and Toltec Scenic Railroad which operates trains over the pass during the tourist season. The original section house, car inspectors house, and part of the old snowshed remain on Cumbres Pass and are maintained by the Friends of the Cumbres and Toltec Scenic Railroad. At present, no one lives at the summit of Cumbres Pass, though when the railroad operated as a common carrier line, railroad personnel were stationed at the pass full-time.

All content from Kiddle encyclopedia articles (including the article images and facts) can be freely used under Attribution-ShareAlike license, unless stated otherwise. Cite this article:
Cumbres Pass Facts for Kids. Kiddle Encyclopedia.