Cunningham is a locality in the Southern Downs Region, Queensland, Australia.

The locality is named after explorer and botanist Allan Cunningham who was the first European to see the lush pastures of the Darling Downs in 1827.

The Condamine River forms the north-eastern boundary of the locality. The Cunningham Highway passes through the locality in an approximately east-west direction and forms part of the southern boundary. The South Western railway line passes through the locality from the north-east to the south-west. The land is mostly used for farming. There is a small urban centre on the Leyburn-Cunningham Road which features the Country Women's Association Memorial Hall, a memorial park and the now disused Cunningham railway station. 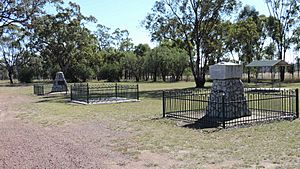 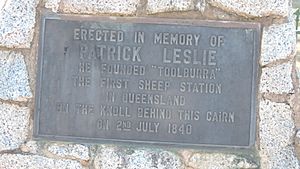 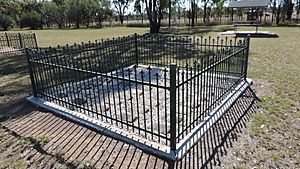 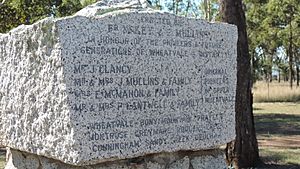 The memorial park has a picnic table as well as three memorials to (left to right):

The memorial cairn to Patrick Leslie was erected by the Rosenthal Shire Council and unveiled on 10 December 1959 by the Shire Chairman, J. A. Costello.

All content from Kiddle encyclopedia articles (including the article images and facts) can be freely used under Attribution-ShareAlike license, unless stated otherwise. Cite this article:
Cunningham, Queensland Facts for Kids. Kiddle Encyclopedia.