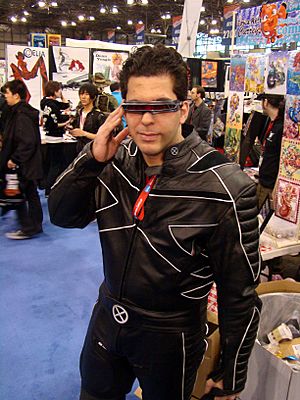 A cosplayer dressed up as Cyclops.

Scott Summers (also known as Cyclops) is a fictional character, a Marvel Comics superhero created by writer Stan Lee and artist/co-writer Jack Kirby. The character first appeared in The X-Men #1 in November 1963. He has been adapted into motion pictures and is played by James Marsden and Tye Sheridan.

Scott Summers is a mutant. He was orphaned as a young boy when his parents died in a plane crash. He survived with his younger brother, Alex Summers. The two brothers were then separated and sent to orphanages. When he was a teenager, Scott was adopted by Charles Xavier, the founder of the X-Men and the headmaster of Xavier's School for Gifted Youngsters (a school for mutants). Under Xavier, Scott learned to control his powers with special glasses, as Scott cannot control them by himself due to an injury he got in the plane crash. Xavier made Scott the first leader of the X-Men, which was made up of four other teenage mutants.

Scott Summers is the son of Christopher Summers, a pilot. He has two brothers, Alex and Gabriel. Scott did not know that he had a second brother for a long time. Scott has multiple children. They are all powerful mutants. His daughter's name is Rachel. She is from an alternate future and can move things with her mind. Scott has a son named Nathan Christopher, and there are multiple versions of him because of time travel. The most well-known version is Cable, a large man with a mechanical arm. The other well-known version is Nate Grey, who is from another alternate timeline.

Scott Summers has been in many romantic relationships. His most famous is with Jean Grey, a very powerful telepath and telekinetic. Jean is Rachel's mother. Jean and Scott have been married twice. Scott has also been married to a woman named Madelyn Pryor, a clone of Jean Grey. Scott did not know Madelyn was a clone when he married her. Madelyn is Nathan Christopher's mother, but Jean Grey helped raise him after Madelyn's first death. Scott has also been in a relationship with Emma Frost, another powerful mutant.

Scott has several close friends among the X-Men. Wolverine (also known as Logan) is one of Scott's best friends, but they tend to fight a lot over their different beliefs. Storm (also known as Ororo Munroe) is also very close with Scott. She has co-lead the X-Men with him many times. Scott considers many X-Men members to be like his family.

Scott is not friends with many superheroes outside of the X-Men because he is a mutant. The exception to this is the young team of heroes called the Champions, who befriended a teenage version of Scott who got pulled into his future for a short time. The adult version of Scott still sees the Champions as his friends in his present day.

Scott Summers has natural superpowers because he is a mutant. His mutant power is to be able to shoot powerful red beams out of his eyes. His beams can knock down large objects, but do not produce heat like a laser. Scott needs special glasses or a visor to control his beams because of a head injury. With his visor, Scott can change the size and power of his beams, from very wide and strong to very focused. Scott is also able to do complicated math in his head to know the angles he needs to bounce his beams just right. Outside of his mutant powers, Scott is a very good tactical leader and is good with children.

All content from Kiddle encyclopedia articles (including the article images and facts) can be freely used under Attribution-ShareAlike license, unless stated otherwise. Cite this article:
Cyclops (Marvel Comics) Facts for Kids. Kiddle Encyclopedia.