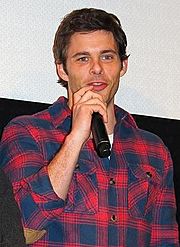 James Paul Marsden (born September 18, 1973) is an American movie, television, stage, and voice actor, singer, and a former model. Marsden is known for his role as Scott Summers or Cyclops in the first three X-Men movies. He is also known for his roles in Hop, Superman Returns, Hairspray, Enchanted, The Notebook, and in 27 Dresses.

Marsden was born on September 18, 1973 in Stillwater, Oklahoma. He studied at Hefner Middle School, at Putnam City North High School, and at Oklahoma State Univerity. Marsden was married to Lisa Linde from 2000 until they divorced in 2011. They had two children.

All content from Kiddle encyclopedia articles (including the article images and facts) can be freely used under Attribution-ShareAlike license, unless stated otherwise. Cite this article:
James Marsden Facts for Kids. Kiddle Encyclopedia.