Cyrus Stephen Eaton, Sr. (December 27, 1883 – May 9, 1979) was a Cleveland-based Canadian-American investment banker, businessman and philanthropist, with a career that spanned seventy years.

For decades Eaton was one of the most powerful financiers in the American Midwest, and he was a colourful and often-controversial figure. He was chiefly known for his longevity in business, for his opposition to the dominance of eastern financiers in the America of his day, for his occasionally ruthless financial manipulations, for his passion for world peace and for his outspoken criticism of United States Cold War policy. He funded and helped organize the first Pugwash Conferences on World Peace, in 1957. He wrote numerous articles and essays on political and economic subjects—"Investment Banking", "Competition or Decadence", "Rationalism Versus Rockefeller", and "A Capitalist Looks at Labour" being some of the best known.

Eaton was born on December 27, 1883 on a farm near the village of Pugwash in Cumberland County, Nova Scotia, Canada. Besides farming, his father, Joseph Howe Eaton, ran a small general store and the district post office. Cyrus' uncle was Charles Aubrey Eaton.

Eaton left Nova Scotia in 1899 to attend Woodstock College, a Baptist-affiliated prep school in Woodstock, Ontario. Later he enrolled at McMaster University, a Baptist university, then located in Toronto, where he studied philosophy and finance, intending to enter the Baptist ministry. He earned his bachelor of arts degree in 1905 with a major in philosophy. 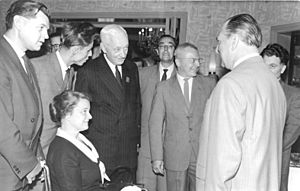 After graduating from McMaster he moved to Cleveland and went to work for the East Ohio Gas Company. This was one of many businesses associated with John D. Rockefeller. After working with East Ohio Gas and Rockefeller for two years, he established his own business in 1907, developing gas utilities which at the time were relatively underdeveloped and unconsolidated in Canada. He managed to secure natural-gas franchises in Manitoba, Canada representing a group of New York investors. The syndicate was not able to complete its financing and folded. However, the Manitoba government was sufficiently impressed to allow Eaton to retain the franchises. Eaton formed a new holding company, the Canada Gas & Electric Corp, later consolidated into the Continental Gas & Electric Corp. in 1913.

After spending several years traveling, Eaton settled in Cleveland in 1913 and became active in many businesses. Eaton joined the Otis & Co. banking firm in 1916. In 1926 he set up an investment vehicle organized as Continental Shares, Inc., a closed end trust. In 1927 he formed Republic Steel, the 3rd-largest U.S. steel company. His business had a complex structure which some felt to be too highly leveraged. His 1929 wealth was an estimated $100 million, most of which was lost in the Great Depression. 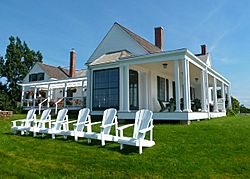 In 1920, Eaton founded the Cleveland Museum of Natural History.

The Russell–Einstein Manifesto was issued in London on July 9, 1955 by Bertrand Russell in the midst of the Cold War. It highlighted the dangers posed by nuclear weapons and called for world leaders to seek peaceful resolutions to international conflict. The signatories included eleven preeminent intellectuals and scientists, including Albert Einstein, who signed it just days before his death on April 18, 1955. A few days after the release, philanthropist Eaton offered to sponsor a conference—called for in the manifesto—in Pugwash, Nova Scotia, Eaton's birthplace. This conference was to be the first of the Pugwash Conferences on Science and World Affairs, held in July 1957.

Besides financial support for the Pugwash Conferences, Eaton gave money to support education in Nova Scotia, particularly in Pugwash and to Acadia University. He supported the establishment of a game sanctuary in Nova Scotia on the Aspotogan Peninsula (his summer home was in Blandford, Nova Scotia where he had his ashes buried. He donated money for the doors of St. Bartholmus Church in Blandford and 12 acres (4.9 hectares) of land in Northfield, Ohio, for the Lee Eaton Elementary School, named in memory of his daughter. He was also a financial supporter of McMaster University, the YWCA, the Cleveland Museum of Natural History and Case Western Reserve University. At his death in 1979, his Blandford estate was purchased by a group of businessmen from Germany. His summer home was destroyed in a fire 2015. 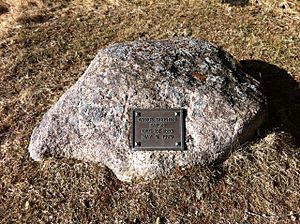 Eaton's 1950s efforts at rapprochement with the Soviet Union won him the 1960 Lenin Peace Prize. He was elected a fellow of the American Academy of Arts and Sciences in 1958, and was the recipient of an honorary degree from Bowling Green State University in 1969. The Pugwash Conferences and their chairman, Joseph Rotblat, were awarded the Nobel Peace Prize in 1995.

All content from Kiddle encyclopedia articles (including the article images and facts) can be freely used under Attribution-ShareAlike license, unless stated otherwise. Cite this article:
Cyrus S. Eaton Facts for Kids. Kiddle Encyclopedia.