Woodstock is a city and the county seat of Oxford County, Ontario in southwestern Ontario, Canada. Woodstock is 128 km southwest of Toronto, north of Highway 401 (Ontario) along the historic Thames River (Ontario). It is known as the Dairy Capital of Canada and promotes itself as "The Friendly City." In 2006, 35,480 people lived in Woodstock.

The community was first settled in 1800 after it was determined by Sir John Graves Simcoe, governor of what was then known as Upper Canada, that the area would make a good townsite. The early settlers were American immigrants from New York state. Increased immigration from Great Britain followed in the 1820s and 1830s. Woodstock was incorporated as a town in 1851 and a city in 1901.

Vansittart Avenue (named after Admiral Henry Vansittart, an early settler) in Woodstock's west end has one of the finest residential Victorian streetscapes in the province. Woodstock has a community center that hosts hockey games in addition to many social gatherings.

The city government, Woodstock City Council, consists of four city councillors and two city and county councillors. Trevor Birtch is the current mayor, following a hard fought and demanding campaign. Oxford Centre is the district in which Woodstock is included when voting in federal elections. Currently, the MP of Oxford is Dave MacKenzie (of the Conservative party).

On August 7, 1979, the Woodstock area was hit by three tornadoes, two of which registered at least F4 on the Fujita Scale. On the west side of town along Ingersoll Road, a Dominion Food Store was heavily damaged while the tornadoes skipped over every other home and business. Dickson's Florist was wiped out and the Fry home was moved on its foundation. Father Grondziel of the new Polish Roman Catholic Church, next to the Dominion Food Store, had just stepped into the washroom when one of the tornadoes passed by and took off the roof of the church and everything in the room he had just been in. No one on the street was injured and the cleanup took many weeks. On the south side, the buildings of the Maranatha Christian Reformed Church and the John Knox Christian School were destroyed, and the only fatality occurred when a vehicle on Highway 401 was blown off the road and the lone occupant killed. 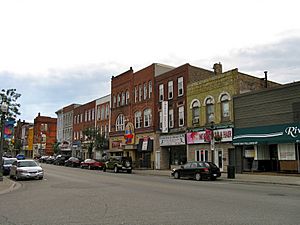 One of Woodstock's most notable historic sites is Old St. Paul's Church, the mother church of the Anglican Communion in Oxford County. The church was built in 1834. It is near the intersection of Huron and Dundas Streets. It used as a temporary jail during the rebellion of 1837. The church is a beautiful, brick cruciform structure surrounded by Woodstock's oldest cemetery. It has original box pews and dozens of memorial tablets commemorating prominent Woodstock citizens.

The "Springbank Snow Countess" was commemorated by a life-size statue (designed by acclaimed Oxford County agricultural artist Ross Butler) which is on the corner of Dundas and Springbank.

This bell iron and lead statue was made to honour a record-setting milk production by a Holstein (Friesian) cow named Snow Countess.

The statue was first unveiled on August 4, 1937 by the Holstein Frisian Association of Canada. Snow Countess was born on November 18, 1919 and died at age 16 on August 9, 1936. During her lifetime, she produced 9,062 pounds of butterfat, impressive at the time. The statue and granite base cost $4,000 to design and erect.

The cow has become an important symbol to Woodstock and is used in many cultural events, such as the annual Cowapalooza Festival. 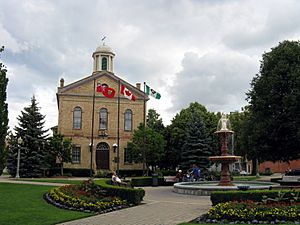 Construction was started on the dam in 1964 and officially completed in 1967. The cost of the dam and land base at that time was close to $6 million. Present annual maintenance costs are about $40,000.

The Woodstock Airport is 2.5 nautical miles (4.6 km) west of Woodstock. 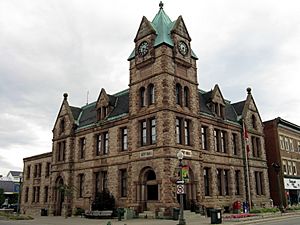 In June 2005, Toyota, the world's second largest automaker, announced plans to build a new, $800 million automobile assembly plant in Woodstock on a 1,000-acre (4 km²) undeveloped undeveloped site in the city's northeast end. The plant was expected to employ 2000 people and begin full production of the Toyota RAV4 SUV in November 2008, at the rate of 150,000 a year. However, due to the recent economic problems and the slowing car sales, Toyota announced that production would be cut by 50% to 75,000 a year and the work force shrunk 40% to 1200 people. Fortunately the other 800 workers are expected to be recalled when car sales increase. It was the first new auto assembly plant to be built in Canada in two decades.

Late in 2008, the plant began producing vehicles, and on December 4, a ceremony attended by Ontario and federal government representatives as well as top Toyota executives, took place to celebrate its official opening.

Early in March 2006, Hino Motors, a Toyota Motor Co. subsidiary, announced that it will be the first Japanese truck manufacturer to build its vehicles in Canada with a new Woodstock plant slated to begin production in April 2006, in the former General Seating plant in the Pattullo Ridge Business Park near Highway 401 and Highway 59.

In late November 2008 the Hino Motors automotive plant was completed.

A major Canadian piano and organ and reed organ company operated under the name of Woodstock Organ Company for many years of the early twentieth century. It was owned by D W Karn, who was at one time mayor of Woodstock. Karn had previously operated an organ and piano manufacturing company under his own name.

Woodstock has one daily newspaper owned by Sun Media Corporation, the Woodstock Sentinel-Review.

The city also has a rebroadcaster of Toronto television station Citytv, operating on channel 31 and primarily targeting London and surrounding towns. 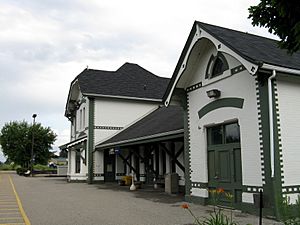 VIA Rail station in Woodstock

Local public transit service is available daily except Sunday on six routes. No service is provided after 18:30.

Provincial Highway 401 is at the south and east edges of the city, with the junction of Highway 403 east of the urban area. Many Oxford County highways and other roads radiate from Woodstock.

All content from Kiddle encyclopedia articles (including the article images and facts) can be freely used under Attribution-ShareAlike license, unless stated otherwise. Cite this article:
Woodstock, Ontario Facts for Kids. Kiddle Encyclopedia.