Darius Songaila (born February 14, 1978) is a Lithuanian professional basketball coach and former player. He serves as an assistant coach for the San Antonio Spurs of the National Basketball Association (NBA). He has represented the Lithuania national team. He played at the power forward and center positions.

Songaila started his basketball career with Lietuvos rytas Marijampolė in second-tier Lithuanian league, the LKAL in 1995. In 1997, he moved to the United States where he attended the New Hampton School in New Hampton, New Hampshire. Songaila played the Nike Hoop Summit in 1998. He was also named to the All-European Under-22 Championship Second Team. 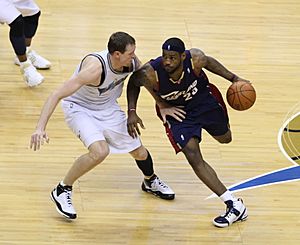 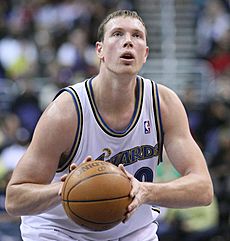 Songaila during his tenure with the Washington Wizards

Songaila was selected with the 50th pick of the 2002 NBA draft by the Boston Celtics, who eventually dealt his rights to the Sacramento Kings.

Songaila signed a one-year deal with the Chicago Bulls in September 2005. He had his most successful season yet with the Bulls, averaging 9.2 points and 4.0 rebounds in 62 games (7 starts). However, he suffered an ankle injury in March 2006 and missed the final 20 games.

On July 17, 2006, Songaila signed with the Washington Wizards. The deal reportedly was worth $23 million over five years. He missed the first 45 games after a surgery for a herniated disc and averaged 7.6 points and 3.6 rebounds in 37 games (1 start).

Songaila eventually became a big part of the Wizards' bench and an occasional starter. He averaged 6.2 points and 3.4 rebounds in 2007–08. At the end of the 2008–09 season, Songaila became a starter because of the injuries suffered by teammates Brendan Haywood and Andray Blatche. He started a career-high 29 games and averaged 7.4 points and 2.9 rebounds.

On June 23, 2009, he was traded to the Minnesota Timberwolves along with Oleksiy Pecherov, Etan Thomas, and a first-round draft pick for Randy Foye and Mike Miller.

On September 9, 2009, he was traded to the New Orleans Hornets along with Bobby Brown in exchange for Antonio Daniels and a 2014 second round pick.

On September 23, 2010, he was traded to the Philadelphia 76ers along with rookie forward Craig Brackins in exchange for Willie Green and Jason Smith. Songaila had career lows with the 76ers, notably in points (1.6 ppg). With the 2010–11 season coming to an end, he became an unrestricted free agent.

In July 2011, he signed a one-year contract with Galatasaray in Turkey worth $1.5 million.

In March 2012, several weeks after leaving Galatasaray, Songaila signed with Blancos de Rueda Valladolid. Later that year, he signed with BC Donetsk.

At the end of the 2014–15 season, he retired from the professional basketball.

On August 5, 2015 Songaila was appointed as an assistant coach for Žalgiris Kaunas.

All content from Kiddle encyclopedia articles (including the article images and facts) can be freely used under Attribution-ShareAlike license, unless stated otherwise. Cite this article:
Darius Songaila Facts for Kids. Kiddle Encyclopedia.