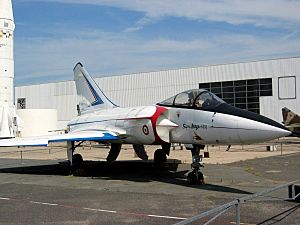 The Dassault Super Mirage 4000 is a prototype of a fighter aircraft. It was built in France by Dassault Aviation to compete McDonnell Douglas F-15 Eagle and Panavia Tornado. Its first flight was in 1979, but it was refused by the French Air Force. Since 1995 it is at the Musée de l'Air et de l'Espace, near Paris.

All content from Kiddle encyclopedia articles (including the article images and facts) can be freely used under Attribution-ShareAlike license, unless stated otherwise. Cite this article:
Dassault Super Mirage 4000 Facts for Kids. Kiddle Encyclopedia.