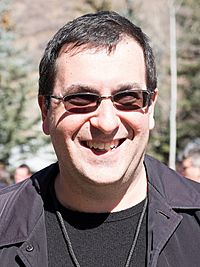 David Bruce "Dave" Goldberg (October 2, 1967 – May 1, 2015) was an American businessman. He was a Yahoo! executive before joining SurveyMonkey in 2009, and later became CEO. He also co-founded LAUNCH Media with Bob Roback.

Goldberg was born in Minneapolis, Minnesota to a Jewish family. He graduated from Harvard University in 1989. He was married to Facebook COO Sheryl Sandberg and had two children.

Goldberg died on May 1, 2015 at a resort in Punta Mita, near Puerto Vallarta in southwest Mexico, aged 47. He died from head trauma and blood loss after falling off a treadmill.

All content from Kiddle encyclopedia articles (including the article images and facts) can be freely used under Attribution-ShareAlike license, unless stated otherwise. Cite this article:
Dave Goldberg Facts for Kids. Kiddle Encyclopedia.