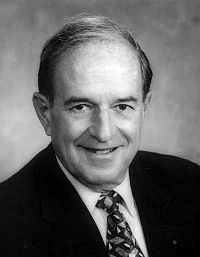 David Atlas (May 25, 1924 – November 10, 2015) was an American meteorologist. He was one of the pioneers of radar meteorology. He worked for the US Air Force. He was professor at the University of Chicago and National Center for Atmospheric Research (NCAR), researcher at NASA and private consultant.

Atlas was born May 25, 1924, in Brooklyn, New York City, from Jewish parents who immigrated from Poland and Russia. He studied at the City College of New York. He retired in 1994.

Atlas died on November 10, 2015 from complications following a stroke at a nursing home in Newark, New Jersey at the age of 91.

All content from Kiddle encyclopedia articles (including the article images and facts) can be freely used under Attribution-ShareAlike license, unless stated otherwise. Cite this article:
David Atlas Facts for Kids. Kiddle Encyclopedia.