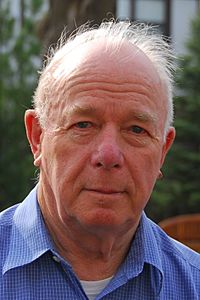 David Binder (February 22, 1931 – June 30, 2019) was an American journalist, author and lecturer. He was born in London. He worked in Washington, D.C. and Berlin. He was a journalist for The New York Times from 1961 to 2004. He reported on political events related to the Cold War on Eastern and Western Europe, the Soviet Union, the United States, Cuba and Puerto Rico. He served was a foreign correspondent in 1961 in Berlin.

All content from Kiddle encyclopedia articles (including the article images and facts) can be freely used under Attribution-ShareAlike license, unless stated otherwise. Cite this article:
David Binder (journalist) Facts for Kids. Kiddle Encyclopedia.