Kids Encyclopedia Facts
This page is about the Israeli author. For other people with the same name, see David Grossman (disambiguation).

David Grossman (Hebrew: דויד גרוסמן; born January 25, 1954) is an Israeli author. His books have been translated into more than 30 languages.

In 2018, he was awarded the Israel Prize for literature.

David Grossman was born in Jerusalem. He is the elder of two brothers. His mother, Michaella, was born in Mandatory Palestine; his father, Yitzhak, immigrated from Dynów in Poland with his widowed mother at the age of nine. His mother's family was Zionist and poor. His grandfather paved roads in the Galilee and supplemented his income by buying and selling rugs. His maternal grandmother, a manicurist, left Poland after police harassment. Accompanied by her son and daughter, she immigrated to Palestine and worked as a maid in wealthy neighborhoods.

Grossman's father was a bus driver, then a librarian. Among the literature he brought home for his son to read were the stories of Sholem Aleichem. At age 9, Grossman won a national competition on knowledge of Sholem Aleichem. He worked as a child actor for the national radio and continued working for the Israel Broadcasting Authority for nearly 25 years.

In 1971, Grossman served in the IDF military intelligence corps. He was in the army when the Yom Kippur War broke out in 1973, but saw no action.

Grossman studied philosophy and theater at the Hebrew University of Jerusalem.

Grossman lives in Mevasseret Zion on the outskirts of Jerusalem. He is married to Michal Grossman, a child psychologist. They had three children, Yonatan, Ruthi, and Uri. Uri was a tank-commander in the Israel Defense Forces, and was killed in action on the last day of the 2006 Lebanon War. Uri's life was later celebrated in Grossman's book Falling Out of Time.

After university, Grossman became an anchor on Kol Yisrael, Israel's national broadcasting service. In 1988 he was sacked for refusing to bury the news that the Palestinian leadership had declared its own state and conceded Israel's right to exist.

He addressed the Israeli–Palestinian conflict in his 2008 novel, To the End of the Land. Since that book's publication he has written a children's book, an opera for children and several poems. His 2014 book, Falling Out of Time, deals with the grief of parents in the aftermath of their children's death. In 2017, he was awarded the Man Booker International Prize in conjunction with his frequent collaborator and translator, Jessica Cohen, for his novel A Horse Walks Into a Bar. 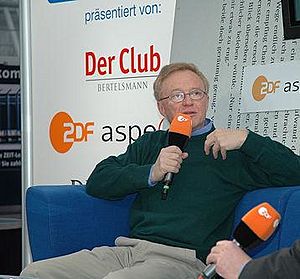 Grossman is an outspoken left-wing peace activist. He has been described by The Economist as epitomising Israel's left-leaning cultural elite.

Initially supportive of Israel's action during the 2006 Lebanon War on the grounds of self-defense, on August 10, 2006, he and fellow authors Amos Oz and A.B. Yehoshua held a press conference at which they strongly urged the government to agree to a ceasefire that would create the basis for a negotiated solution, saying: "We had a right to go to war. But things got complicated. ... I believe that there is more than one course of action available."

Two days later, Grossman's 20-year-old son Uri, a Staff Sergeant in the 401st Armored Brigade, was killed in southern Lebanon when his tank was hit by an anti-tank missile shortly before the ceasefire came into effect. Grossman explained that the death of his son did not change his opposition to Israel's policy towards the Palestinians. Although Grossman had carefully avoided writing about politics, in his stories, if not his journalism, the death of his son prompted him to deal with the Israeli-Palestinian conflict in greater detail. This appeared in his 2008 book To The End of the Land.

Two months after his son's death, Grossman addressed a crowd of 100,000 Israelis who had gathered to mark the anniversary of the assassination of Yitzhak Rabin in 1995. He denounced Ehud Olmert's government for a failure of leadership and he argued that reaching out to the Palestinians was the best hope for progress in the region: "Of course I am grieving, but my pain is greater than my anger. I am in pain for this country and for what you [Olmert] and your friends are doing to it."

About his personal link to the war, Grossman said: "There were people who stereotyped me, who considered me this naive leftist who would never send his own children into the army, who didn't know what life was made of. I think those people were forced to realise that you can be very critical of Israel and yet still be an integral part of it; I speak as a reservist in the Israeli army myself.

In 2010 Grossman, his wife, and her family attended demonstrations against the spread of Israeli settlements. While attending weekly demonstrations in Sheikh Jarrah in East Jerusalem against Jewish settlers taking over houses in Palestinian neighbourhoods, he was assaulted by police. When asked by a reporter for The Guardian about how a renowned writer could be beaten, he replied: "I don't know if they know me at all."

In 2015, Grossman withdrew his candidacy for the Israel Prize for Literature after Prime Minister Binyamin Netanyahu tried to remove two of the judging panel whom he claimed were "anti-Zionist". He was awarded the prize in 2018.

All content from Kiddle encyclopedia articles (including the article images and facts) can be freely used under Attribution-ShareAlike license, unless stated otherwise. Cite this article:
David Grossman Facts for Kids. Kiddle Encyclopedia.