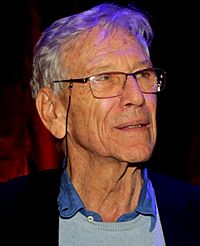 Amos Oz (Hebrew: עמוס עוז‎‎; born Amos Klausner; May 4, 1939 – December 28, 2018) was an Israeli writer, novelist, journalist and philosopher. He was a professor of literature at Ben-Gurion University in Beersheba. He was born in Jerusalem.

Oz's work has been published in 45 languages in 47 countries. He was honored with a Legion of Honour of France, the Goethe Prize, the Prince of Asturias Award in Literature, the Heinrich Heine Prize and the Israel Prize.

In 2007, a selection from the Chinese translation of A Tale of Love and Darkness was the first work of modern Hebrew literature to appear in an official Chinese textbook. His other best known works were My Michael and A Perfect Peace.

Oz was a supporter of a two-state solution to the Israeli–Palestinian conflict.

All content from Kiddle encyclopedia articles (including the article images and facts) can be freely used under Attribution-ShareAlike license, unless stated otherwise. Cite this article:
Amos Oz Facts for Kids. Kiddle Encyclopedia.