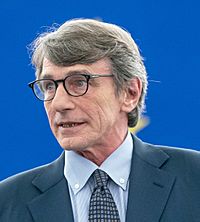 David Maria Sassoli (born 30 May 1956) is an Italian politician and journalist. He has been the President of the European Parliament since July 2019. He is a member of the Democratic Party. He first became a member of the European Parliament in July 2009. Before entering politics, he worked for newspaper Il Giorno and as a news reporter for TG3 and TG1.

Sassoli was born in Florence. He is married to Alessandra Vittorini, and has two children. He is a fan of football club Fiorentina.

All content from Kiddle encyclopedia articles (including the article images and facts) can be freely used under Attribution-ShareAlike license, unless stated otherwise. Cite this article:
David Sassoli Facts for Kids. Kiddle Encyclopedia.