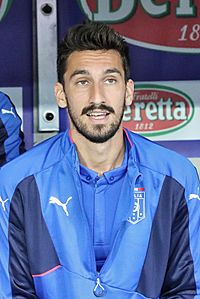 Davide Astori (7 January 1987 – 4 March 2018) was an Italian professional footballer. He played as a central defender. He was born in San Giovanni Bianco, Italy.

Astori started his senior career with Milan, spending loan spells with Pizzighettone and Cremonese. In 2008 Cagliari signed him. He played youth football for Pontisola. He made his international debut for Italy in 2011 and represented his country 14 times, scoring one goal.

All content from Kiddle encyclopedia articles (including the article images and facts) can be freely used under Attribution-ShareAlike license, unless stated otherwise. Cite this article:
Davide Astori Facts for Kids. Kiddle Encyclopedia.