DePue is a village in Bureau County, Illinois, United States. The population was 1,838 at the 2010 census. It is part of the Ottawa–Streator Micropolitan Statistical Area.

DePue was originally called Trenton, and under the latter name was laid out in 1853. The present name is for an early French fur trader by the name of De Pue. 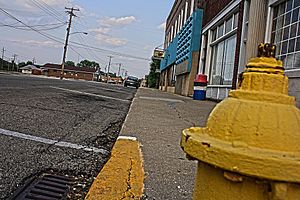 West 4th Street in DePue serves as the business district for the village.

There were 658 households out of which 33.6% had children under the age of 18 living with them, 52.4% were married couples living together, 11.4% had a female householder with no husband present, and 31.2% were non-families. 27.5% of all households were made up of individuals and 16.7% had someone living alone who was 65 years of age or older. The average household size was 2.78 and the average family size was 3.42.

The lake and adjacent park feature wildlife and recreation. The American Power Boat Association (APBA) and the DePue Men's Club (a social and volunteer organization) host a weekend of boat racing on Lake DePue. The event draws spectators from across the country and brings entertainment and food vendors to the lakeside park. Barack Obama visited when he was an Illinois legislator. In a January 16, 2011, news story featured in the online edition of the Peoria Journal Star, Associated Press reporter Tammy Webber reported that the oxbow lake, surrounded by a Superfund site, is polluted by high levels of metals such as zinc, lead, arsenic, cadmium, and chromium because of smelting activity there for the automotive and appliance industries, chiefly by New Jersey Zinc and Mobil Chemical. The village is urging Illinois Attorney General Lisa Madigan to investigate whether the Illinois Environmental Protection Agency, which has oversight over the case, is pushing the companies hard enough. This is important because the town alleges the companies and the IEPA have not done enough to combat the pollution, that has made the lake markedly shallower. This phenomenon could, unless rapidly remedied (perhaps by the temporary fix of dredging, which the IEPA cannot legally order in this case), soon interfere with the small municipality's efforts to keep its remaining revenue source for most supplemental projects, the competition. The manufacturing jobs have entirely disappeared.

In the summer of 2012, as a result of both the summer's drought and Lake DePue's pollution, the APBA nearly cancelled its National Championship Races due to shallow water. In a display of community and hard work, DePue's citizens built a dam at the mouth of the lake and raised the water, by pumps and the lake's springs, to racing level in a matter of weeks.

All content from Kiddle encyclopedia articles (including the article images and facts) can be freely used under Attribution-ShareAlike license, unless stated otherwise. Cite this article:
DePue, Illinois Facts for Kids. Kiddle Encyclopedia.