Death and state funeral of Gerald Ford facts for kids 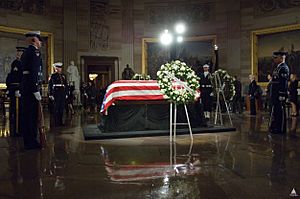 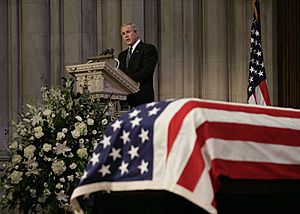 At 8:49 p.m. local time, President Ford's wife of 58 years, Betty Ford, issued a statement that confirmed his death: "My family joins me in sharing the difficult news that Gerald Ford, our beloved husband, father, grandfather and great-grandfather has passed away at 93 years of age. His life was filled with love of God, his family and his country."

Ford was the second president to die during the presidency of George W. Bush, as well as the second to die in the twenty-first century. The first being Ronald Reagan.

The schedule for the state funeral was announced at a press briefing on December 27 in Palm Desert, California.

President and Mrs. Ford and their family chose to have the state funeral and related services in three phases (Palm Desert, California; Washington, D.C.; Grand Rapids, Michigan), with his burial in a hillside tomb next to the Gerald R. Ford Presidential Museum in Grand Rapids, Michigan. The services and ceremonies were held from December 29 through January 3.

The state funeral took place at the U.S. Capitol on Saturday, December 30, 2006, with further funeral services on January 2 at Washington National Cathedral and on January 3 at Grace Episcopal Church in Grand Rapids.

All content from Kiddle encyclopedia articles (including the article images and facts) can be freely used under Attribution-ShareAlike license, unless stated otherwise. Cite this article:
Death and state funeral of Gerald Ford Facts for Kids. Kiddle Encyclopedia.