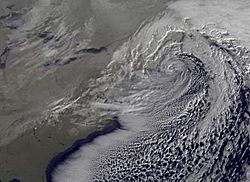 Satellite image of the blizzard on December 27.

The storm that caused the snowfall started as drizzle in California. It grew into a rainstorm. As it moved northeast, it turned into a blizzard. On 26 December 2010, the blizzard reached New York City. The blizzard caused a large amount of snow and strong winds. It also caused thundersnow, where thunder and lightning happen while snow is falling. It moved away from the city on December 27th. On December 28th, the blizzard moved out over the Atlantic Ocean.

New York City received a large amount of snow and had high winds. About 20 in (51 cm) of snow fell on the city. Places east of the city, for example eastern Long Island, saw some rain from the storm. The blizzard did not affect far north of New York City. Albany got less than 1 in (2.5 cm) of snow from the blizzard.

All content from Kiddle encyclopedia articles (including the article images and facts) can be freely used under Attribution-ShareAlike license, unless stated otherwise. Cite this article:
December 2010 North American blizzard Facts for Kids. Kiddle Encyclopedia.