Del Cerro (Spanish for "of the hill") is a hilly residential neighborhood of approximately 2,300 residents in the eastern part of San Diego, California. Del Cerro borders the communities of San Carlos, Allied Gardens, College Area, Grantville, and the city of La Mesa, and is adjacent to Lake Murray and San Diego State University. For planning purposes the city includes it in the Navajo community planning area.

The San Diego State University Master Plan has proposed to build a housing project for faculty and staff on university-owned undeveloped open space in Del Cerro (at the site of Adobe Falls, a city historic landmark). The plan to expand the university's facilities into Del Cerro was initially proposed in 2005 but was blocked by a judge's ruling. The plan's Environmental Impact Report had been contested since 2005 through litigation brought by the Del Cerro Action Council, the City of San Diego, and others. On February 11, 2010 a judge issued a decision in favor of SDSU, but the city appealed the denial of its writ. The case remains under review at the Court of Appeal.

The area is vulnerable to wildfires, but residents have battled with the city over getting permission to clear brush from slopes and around homes. 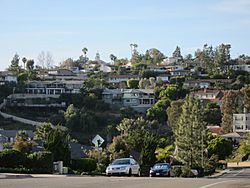 Volunteer community groups include the Del Cerro Action Council. The neighborhood is one of several communities represented by the Navajo Community Planners which advises the mayor and city council on land use issues in the area.

A Block Party is held annually with live bands, food, and entertainment for children.

The area is served by the Mission Times Courier, a greater area community newspaper delivered to residents and covering Del Cerro news.

Del Cerro is located in City Council District 7 and is currently represented by Councilmember Raul Campillo.

All content from Kiddle encyclopedia articles (including the article images and facts) can be freely used under Attribution-ShareAlike license, unless stated otherwise. Cite this article:
Del Cerro, San Diego Facts for Kids. Kiddle Encyclopedia.