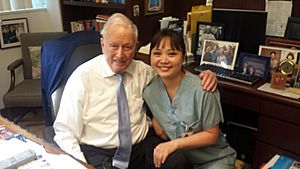 M.D. Denton Cooley with a medical student in March 2015

Denton Arthur Cooley (August 22, 1920 – November 18, 2016) was an American heart surgeon. He was known for doing the first implantation of a complete artificial heart. Cooley was also the founder and surgeon in-chief of The Texas Heart Institute, chief of Cardiovascular Surgery at St. Luke's Episcopal Hospital, consultant in Cardiovascular Surgery at Texas Children's Hospital, and a clinical professor of Surgery at the University of Texas Medical School at Houston.

He studied zoology in the University of Texas and graduated in 1941. He began his medical education at the University of Texas Medical Branch in Galveston. He completed his medical degree and his surgical training at the Johns Hopkins School of Medicine in Baltimore, Maryland, where he also completed his internship. At Johns Hopkins, he worked with Dr. Alfred Blalock and helped with the first Blue Baby procedure to treat a child's congenital heart defect.

In 1946, Cooley served as chief of surgical services at the station hospital in Linz, Austria for the Army Medical Corps. He was discharged (released) in 1948 with the rank of captain. Then, he returned to Johns Hopkins to remain as an instructor in surgery. In 1950, he went to London to work with Lord Russell Brock.

All content from Kiddle encyclopedia articles (including the article images and facts) can be freely used under Attribution-ShareAlike license, unless stated otherwise. Cite this article:
Denton Cooley Facts for Kids. Kiddle Encyclopedia.