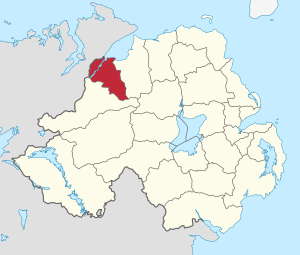 The council provided services to nearly 108,000 people, making it the third-largest of the then 26 district councils in Northern Ireland by population. The council was made up of 30 councillors, elected every four years from five electoral areas and held its meetings in The Guildhall. The mayor for the final 2014–2015 term was Brenda Stevenson of the Social Democratic and Labour Party, with Gary Middleton of the Democratic Unionist Party serving as deputy mayor.

Coat of arms and motto 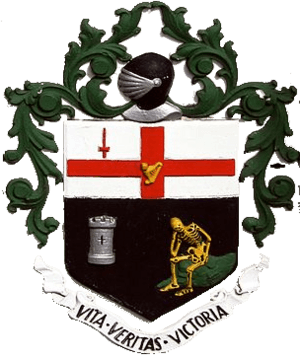 The devices on the city's arms are a skeleton and a three-towered castle on a black field, with the chief or top third of the shield depicting the arms of the City of London: a red cross and sword on white. In the centre of the cross is a gold harp. The blazon of the arms is as follows:

Sable, a human skeleton Or seated upon a mossy stone proper and in dexter chief a castle triple towered argent on a chief also argent a cross gules thereon a harp or and in the first quarter a sword erect gules

According to documents in the College of Arms in London and the Office of the Chief Herald of Ireland in Dublin, the arms of the city were confirmed in 1613 by Daniel Molyneux, Ulster King of Arms. The College of Arms document states that the original arms of the City of Derry were ye picture of death (or a skeleton) on a moissy stone & in ye dexter point a castle and that upon grant of a charter of incorporation and the renaming of the city as Londonderry in that year the first mayor had requested the addition of a "chief of London".

Theories have been advanced as to the meaning of the "old" arms of Derry, before the addition of the chief bearing the arms of the City of London:

In 1979, Londonderry City Council, as it was then known, commissioned a report into the city's arms and insignia, as part of the design process for an heraldic badge. The published report found that there was no basis for any of the popular explanations for the skeleton and that it was "purely symbolic and does not refer to any identifiable person".

The 1613 records of the arms depicted a harp in the centre of the cross, but this was omitted from later depictions of the city arms, and in the Letters Patent confirming the arms to Londonderry Corporation in 1952. In 2002 Derry City Council applied to the College of Arms to have the harp restored to the city arms, and Garter and Norroy & Ulster Kings of Arms accepted the 17th century evidence, issuing letters patent to that effect in 2003.

The motto attached to the coat of arms reads in Latin, "Vita, Veritas, Victoria". This translates into English as, "Life, Truth, Victory".

From 1973 elections to Derry City Council were conducted under the single transferable vote system, and are normally held every four years. Elections took place in five electoral areas, the boundaries of which were changed for the 1985 local elections, when the number of councillors was increased from 27 to its final figure of 30.

The last elections to Derry City Council were held on 5 May 2011, with the city's voters electing thirty councillors across five electoral areas. The election resulted in all four parties returning the same number of seats they had won in the 2005 elections, with the SDLP remaining the largest party, only two seats short of overall control of the council. The results are summarised below:

†Unionist parties fought the 1973 elections in an electoral pact, as United Loyalists. Of the 9 councillors elected under this label, 5 contested the 1977 elections for the UUP, 1 for the DUP, 1 for the Vanguard Unionist Progressive Party, 1 as a Loyalist, while one councillor did not stand again.

Derry formerly had a Shadow Council for young people, from about 1999 to 2008. This was made up from 16- to 22-year-olds elected from geographical areas in the city, as well as interest, political groups and also LGBT community groups. The Shadow Council worked in cooperation with Derry City Council and selected a "Junior Mayor" as its representative to the media and public.

The area covered by Derry City Council had a population of 107,877 residents according to the 2011 Northern Ireland census.

All content from Kiddle encyclopedia articles (including the article images and facts) can be freely used under Attribution-ShareAlike license, unless stated otherwise. Cite this article:
Derry City Council Facts for Kids. Kiddle Encyclopedia.