Devil's club or devil's walking stick (Oplopanax horridus, Araliaceae; syn. Echinopanax horridus, Fatsia horrida) is a large understory shrub native to the arboreal rainforests of the Pacific Northwest, but also disjunct on islands in Lake Superior. It is noted for its large palmate leaves and erect, woody stems covered in noxious and irritating spines. It is also known as Alaskan ginseng and similar names, although it is not a true ginseng. 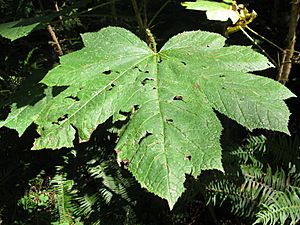 Leaf of a devil's club, in late summer

The plant is covered with brittle yellow spines that break off easily if the plants are handled or disturbed, and the entire plant has been described as having a "primordial" appearance. The plants are slow growing and take many years to reach seed-bearing maturity; this makes them very sensitive to human impact as they do not reproduce quickly. 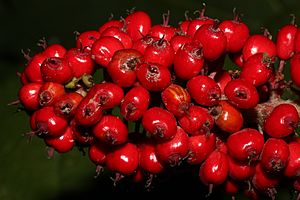 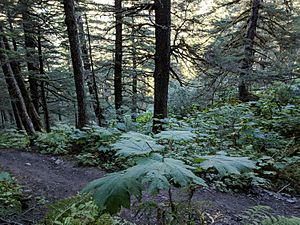 Devil's Club as found on the slopes of Mt. Roberts, Juneau, AK

This species usually grows in moist, dense forest habitats, and is most abundant in old-growth conifer forests in the Pacific Northwest. It is found from southcentral Alaska south to Oregon, and eastward to western Alberta and Montana. Disjunct native populations also occur over 1,500 kilometres (930 mi) away in Lake Superior on Isle Royale and Passage Island, Michigan and Porphyry Island and Slate Island, Ontario.[1]

Devil's club reproduces by forming clonal colonies by means of rhizomes. What can appear to be several different plants may actually have all been one plant originally, with the clones detaching themselves after becoming established by laying down roots. 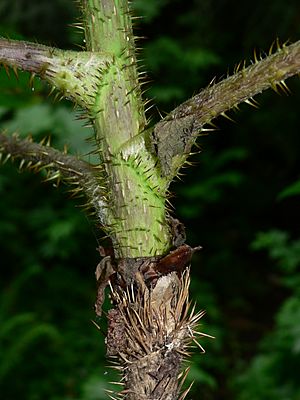 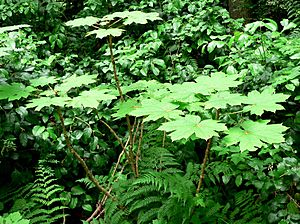 Large leaves extend from the top of spiny stems.

Traditionally, the charcoal from the stalks is still used to make ceremonial and protective face paints, and among the Ditidaht and neighboring groups, it was equally significant to red ochre as a symbolic link to the spirit world. Native American peoples such as the Tlingit and Haida have used the plant as traditional medicine for ailments such as adult-onset diabetes, as well as rheumatoid arthritis.

The plant has been used ceremonially by the Tlingit, Tsimshian, and Haida people residing in Southeast Alaska and coastal British Columbia. A piece of Devil's club hung over a doorway is said to ward off evil. The plant is harvested and used in a variety of ways, most commonly as an oral tea in traditional settings, but also poultices and ointments. Native Americans also dried and powdered the bark for use as a deodorant and used the mashed berries to clean hair.

Because devil's club is related to American ginseng, some people try to market the plant as an 'adaptogen'. The plant has been harvested for this purpose and sold widely as "Alaskan ginseng". Despite some morphological similarities between the araliaceous members Panax ('true' ginseng), Eleutherococcus senticosus ("Siberian ginseng") and devil's club, the different genera are chemically diverse.

All content from Kiddle encyclopedia articles (including the article images and facts) can be freely used under Attribution-ShareAlike license, unless stated otherwise. Cite this article:
Devil's club Facts for Kids. Kiddle Encyclopedia.