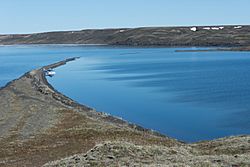 The Devil Mountain Lakes are the largest Maar lakes in the world.

Seward Peninsula with Devil Mountain Lakes at the top

Devil Mountain Lakes (Inupiaq: Qitiqłiik) is a maar (a form of crater lake) in the western part of Alaska. The lake is considered to be the largest maar in the world and is part of the Espenberg volcanic field.

The lake was probably shaped during volcanic eruptions about 21000 years ago during the Pleistocene Ice Age as lava flows came through the permafrost creating violent underground explosions.

All content from Kiddle encyclopedia articles (including the article images and facts) can be freely used under Attribution-ShareAlike license, unless stated otherwise. Cite this article:
Devil Mountain Lakes Facts for Kids. Kiddle Encyclopedia.