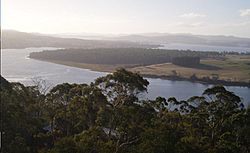 The Tamar River, the boundary between Devon and Dorset

Devon Land District is one of the twenty land districts of Tasmania which are part of the Cadastral divisions of Tasmania. It was formerly one of the 18 counties of Tasmania. The 1911 Britannica describes Beaconsfield [1] and East Devonport [2] as being in the county. It is bordered by the Tamar River in the east, and the Emu River near Burnie in the west. Deloraine is on the southern edge with the border with Westmoreland Land District. It is named after the English county of Devon.

No hundreds and parishes were proclaimed for Devon County at this time.

All content from Kiddle encyclopedia articles (including the article images and facts) can be freely used under Attribution-ShareAlike license, unless stated otherwise. Cite this article:
Devon Land District Facts for Kids. Kiddle Encyclopedia.