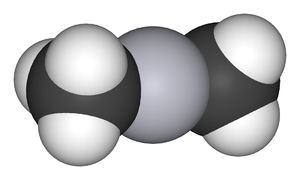 Dimethylmercury, sometimes called dimethyl mercury, is a chemical compound. It contains methyl and mercury ions. Its chemical formula is (CH3)2Hg.

It is a colorless liquid. It evaporates very fast. It is a very strong toxin to the nervous system. It doesn't react with water like other similar chemicals. It contains mercury in its +2 oxidation state. It can react with mercury(II) chloride to make a crystalline chemical compound.

It is made by reacting a sodium amalgam with methyl iodide.

It has almost no uses. It is rarely used to test instruments that are used to detect mercury.

It is extremely toxic. If just a drip gets placed on human skin, it will poison the person. It gets into the brain easily when it goes through the skin. The poisoning does not happen quickly, though. It sometimes can take months before the poisoning effects show.

All content from Kiddle encyclopedia articles (including the article images and facts) can be freely used under Attribution-ShareAlike license, unless stated otherwise. Cite this article:
Dimethylmercury Facts for Kids. Kiddle Encyclopedia.