For the Irish diocese, see Diocese of Ross (Ireland). 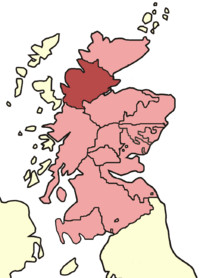 The Diocese of Ross was an ecclesiastical territory or diocese in Scotland in the Middle Ages and Early Modern period. The Diocese was led by the Bishop of Ross, and was based at Fortrose. The diocese had only one Archdeacon, the Archdeacon of Ross, first attested in 1223 with the appearance of Archdeacon Robert. There is only one known rural dean, the rural dean of Dingwall, though there were almost certainly more.

Following the Scottish Reformation of 1560, the Presbyterian Church of Scotland abolished the episcopacy in the diocese. The Roman Catholic Church continued to appoint bishops in communion with the Holy See. Bishop John Lesley, however, was a post-reformation bishop who remained catholic. Episcopacy was abolished in the Church of Scotland between 1638 and 1661, when it was restored under the "Restoration Episcopate". After the Glorious Revolution of 1688, Scottish bishoprics again came under threat until in 1689 Episcopacy was permanently abolished in the established church in Scotland. From the early 18th century, the Scottish Episcopal Church appointed bishops.

In the twelfth century, the diocese is usually called "Rosemarkie", but thereafter it is called Ross. The diocese covered, roughly, the old county of Ross (also called Ross-shire).

In 1973, it was nominally restored as a Catholic Titular see of the lowest (Episcopal ) rank, under the name Rosemarkie. It has had three incumbents

All content from Kiddle encyclopedia articles (including the article images and facts) can be freely used under Attribution-ShareAlike license, unless stated otherwise. Cite this article:
Diocese of Ross (Scotland) Facts for Kids. Kiddle Encyclopedia.