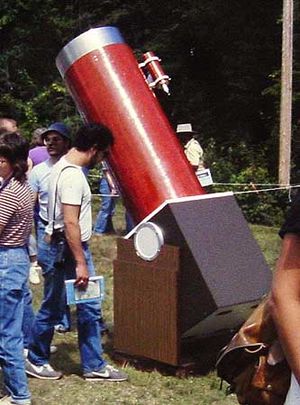 A Dobsonian telescope on display at Stellafane in the early 1980s

It is "altazimuth-mounted". An altazimuth or alt-azimuth mount is a simple two-axis mount. It supports and rotates an instrument about two perpendicular axes – one vertical and the other horizontal.

It was popularised by John Dobson in 1965. It increased the size of telescopes for amateur astronomers. Dobson's telescopes had a simplified mechanical design that was easy to make from readily available components. It made a large, portable, low-cost telescope.

The design works for looking at faint, deep-sky objects such as nebulae and galaxies. This type of observation needs a large objective diameter (i.e. light-gathering power) of relatively short focal length. It can be taken to less light-polluted places.

All content from Kiddle encyclopedia articles (including the article images and facts) can be freely used under Attribution-ShareAlike license, unless stated otherwise. Cite this article:
Dobsonian telescope Facts for Kids. Kiddle Encyclopedia.