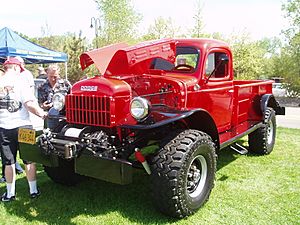 The Dodge Power Wagon was a four wheel drive light truck that was produced in various model series from 1945 to 1981 by Dodge. It was also produced as a nameplate for the Dodge Ram from 2005 to 2013, and, most recently, as an individual model marketed by Ram Trucks.

As a version of the Dodge 3/4 ton WC series World War II military trucks, the Power Wagon was introduced in 1946 as the first civilian 4×4. It was meant to compete with military-based Ford/Marmon-Herrington and GMC trucks. The Power Wagon had an enclosed all-weather cab and an 8-foot cargo bed. It had a 126 inch (3,200 mm) up to a 147" wheelbase chassis. The Power Wagon had a 230 cubic inch flathead inline-six engine. It had a two-speed transfer case. It came with a 4-speed manual transmission with a power take off (PTO) which would send power front or rear for operating auxiliary equipment. It had 9.00/16-8 ply tires on 16×6.50 inch 5-bolt wheels. In 1961 the 230 engine was replaced with the 251 cubic-inch flat head six.

The one-ton rated Power Wagon's gross vehicle weight rating (GVWR) was 8,700 pounds. Its maximum payload was 3,000 pounds. It was discontinued in 1968 (against the wishes of the United States Forest Service) due to the expense of new safety and emission requirements. But they were exported until 1978. 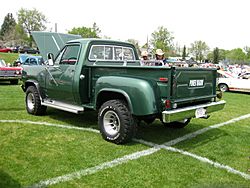 1977 Dodge Power Wagon pickup truck with a step side box

In 1967 Dodge released a Power Wagon pickup version better suited for the pickup truck market. It was based on Dodge's pickup truck line. A big-block 383 V8 engines became an option starting in 1967. From 1961 to 1971 the body was called the "Sweptline". It then offered a more modern body image from 1972 through 1980 with varied grilles and paint colors. In 1975 the 4-wheel drive became full-time with a 2-speed transfer case. This was changed back to part-time 4-wheel drive in 1980 due to the energy crisis. A huge boost in sales followed the 1974 release of the extended "Club Cab," popular with families and camper towing. The 4-door Crew Cab was far less common and is quite desirable for collectors. Utility and function was unmatched by few competing models, as the towing, payload, and snow plowing capacity of the Power Wagon equipped with "Dana 60" 8-lug axles was very popular with road maintenance crews.

The Power Wagon was sold through the 1980 model year. A number of engineering and styling improvements were made over the years as the truck grew in size and weight. But the basic truck remained generally constant throughout its life and underwent one last major body change in 1972. 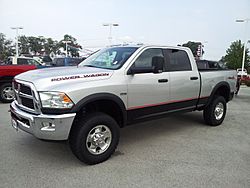 For 2005, Dodge brought back the Power Wagon name on a version of the Dodge Ram 2500. It was a special off-road version of the Ram 2500 with a 5.7L Hemi V8 as the only engine option. The truck interior remain similar to standard production Ram. As of 2010, the Power Wagon was only available as a Crew Cab Short Bed model. As of 2014, the engine was upgraded to a 6.4L Hemi. The 2014 RAM 2500 Power Wagon got coil springs at all four corners. It is available only with the six-speed automatic transmission.

All content from Kiddle encyclopedia articles (including the article images and facts) can be freely used under Attribution-ShareAlike license, unless stated otherwise. Cite this article:
Dodge Power Wagon Facts for Kids. Kiddle Encyclopedia.