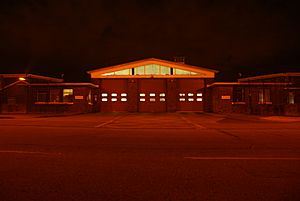 Dolphin's Barn (Irish: An Carnán, meaning the parcel) is an inner city suburb of Dublin, Ireland, situated on the Southside of the city in the Dublin 8, and partially in the Dublin 12, postal district. Its name derives from a family named Dolphyn (Murno Gladst Dolphyn) who once owned a prominent storehouse there. Surrounding areas include The Liberties, Inchicore, Islandbridge, Kilmainham and Crumlin. It is home to one of the city's busiest fire stations which is situated on the corner of Parnell Road and Rutland Avenue. The Grand Canal passes through the centre of the locality under Dolphin's Barn Bridge.

All content from Kiddle encyclopedia articles (including the article images and facts) can be freely used under Attribution-ShareAlike license, unless stated otherwise. Cite this article:
Dolphin's Barn Facts for Kids. Kiddle Encyclopedia.